PITCH Perfect As Mark Celebrates A Decade At Cappielow

MANY managers and players have come and gone at Morton in recent years but one fans’ hero, regularly winning titles for the club, has just celebrated a decade at Cappielow. Jeremy Burrows met groundsman Mark Farrell at his field of dreams. 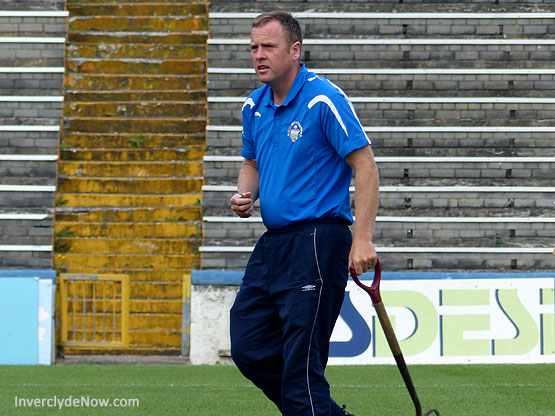 I expected things to be quiet at Morton’s Cappielow stadium when I went to have a chat with groundsman Mark Farrell. It was a Tuesday morning and the players don’t train at the site. But there was a group of people outside — speaking Dutch — and a large coach then drew up with the Under-16 Scotland squad for a friendly against Holland.

Here was evidence of the success Mark has had over the past 10 years in nurturing the hallowed turf at Cappielow. In his first season in the job — 2004/5 — the ground hosted 25 matches. This season, he tells me, there will be 80 to 90 games.

As we chat, he explains that the Under-16 international tie about to start is the seventh game in 16 days, adding: “Teams want a good grass pitch. A lot have gone plastic. But grass can take more matches than before. There’s new technology. There are machines I couldn’t have dreamt of 10 years ago.”

As well as Morton’s first team and development squad fixtures and youth internationals, there are games involving younger teams at a domestic level. Celtic youth and development squads are playing 18 times at Cappielow this season. Scotland’s national team have trained there on a number of occasions as well.

I enjoy a cuppa and a custard cream in Mark’s office beside the pitch, the grass busy with Dutch and Scottish teenage players warming up. The Scottish Football Association’s performance director Mark Wotte walks past and is roped into the interview by Mark, to comment on the increasing role played by the Greenock venue. He said: “I was asked on Twitter the other day why we are coming to Cappielow so much. The location is good. The people here are so helpful preparing the pitch. It is a proper grass park and it is always good to come to a traditional old stadium.” 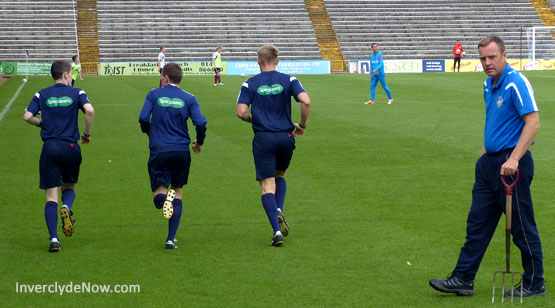 Mark was just 10-years-old when he started helping at Newton Heath cricket ground in Manchester. He recalled: “It was just 50 yards from my home. I spent all my time there. It just grew from there. I did green-keeping and groundsman courses.”

He became a groundsman at a golf course at Loch Lomond and then at one in Sheffield before getting the Cappielow job in September 2004. “After that I never looked back,” he said.

Looking after the pitch is a science and Mark admits: “It takes a lot of hours, my own time, weekends. I understand how the pitch works but it took three to four years to get to know it fully.” Mark has risen to the challenge posed by Greenock’s climate working to improve the sand in the pitch and letting the roots grow.

He said: “The amount of rainfall we get, some nights it’s two inches, but the pitch can take it, as long as it is not Biblical proportions — flash floods in a short space of time. There was flooding a few years ago on a Friday afternoon. There was a moat on the gravel around the pitch, the offices in the stadium flooded but the pitch was fine for the match the next day.”

But he adds: “I can’t do anything about frost. We have covers but, if it’s cold, it’s cold.”

Mark doesn’t just aim to make sure matches can go ahead when they are supposed to but that they are played on the best possible surface. “I have the pitch good no matter who it is for — reserves, first team, a boys’ club tournament,” Mark said, adding: “I try and get it so the pitch is looking the same at the end as it was at the start of the match.”

His expertise and devotion have earned him accolades — winning Groundsman of the Year awards four times. (No doubt there would have been more but the awards scheme no longer runs in Scotland).

Not surprisingly, he has also earned the respect of his employers. Mark said: “They have never once questioned anything I have done or spent. They leave me to it.”

Ironically Mark, who lives locally with his wife and two daughters, reveals he hates playing football and would sooner play and watch cricket than the beautiful game. In any case, he adds, whatever is happening on the pitch, he’s “too busy looking at the grass.”