MARKING Six Decades Of IBM In Greenock’s Valley Of Opportunity

IBM Greenock employee number 49, Tom Stevenson, looks back on the electronics giant’s contribution to Inverclyde, exactly 60 years since a ceremony was held to mark the opening of the factory at Spango Valley. Tom worked for nearly 40 years with IBM, starting as an office boy and finishing as quality assurance manager. 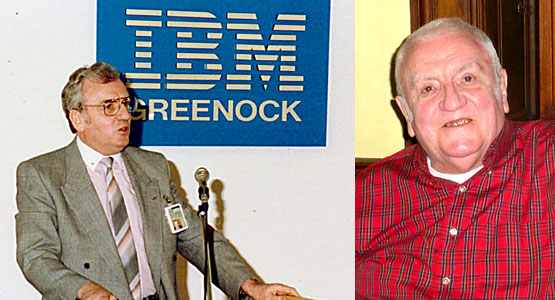 Tom on retiral in 1991 and present day

A little over 10 years after his D-Day triumph, General Eisenhower, by then president of the United States, wrote in the New York Times: “In the passing of Thomas J Watson, the nation has lost a truly fine American — I have lost a good friend whose counsel was always marked by a deep-seated concern for people.”

The Tom Watson referred to in this obituary was the founder of International Business Machines. He came to Greenock, stayed in the Tontine Hotel, worked with our MP Hector McNeil, and between them they brought IBM to Greenock.

Sixty years ago today — 30 August 1954 — I had been with IBM for two years, having joined them at age 15 as their 49th employee. On that August Monday, myself, 500 fellow employees and partners plus many VIPs were gathered at Spango Valley to celebrate the dedication of IBM’s new manufacturing plant.

Tom Watson was in his 80th year by then and was unable to cross the Atlantic for the event. Instead he was represented by one of his two sons. Arthur K Watson was president of IBM World Trade Corporation and later, during the presidency of Richard Nixon, was appointed US ambassador to France.

Tom Watson sent a message to be read out: “We are particularly pleased that this new plant has been located here in beautiful Spango Valley which offers excellent facilities for the export of our products. Mrs Watson joins me in extending our warmest regards and kindest wishes to every member of the IBM family in the United Kingdom, our good neighbours whose friendship we deeply appreciate.”

Arthur Watson told the assembled guests that hour years earlier when IBM were looking for a factory site in the UK, he and his father visited Secretary of Sate for Scotland Hector McNeil in the House of Commons. The Greenock MP had told them: ‘I have something for you in Scotland.'” Five minutes later, arrangements had been made for them to come to Greenock. They arrived at Spango Valley where Tom Watson had said: “This is the Valley of Opportunity. Here we will stay.” 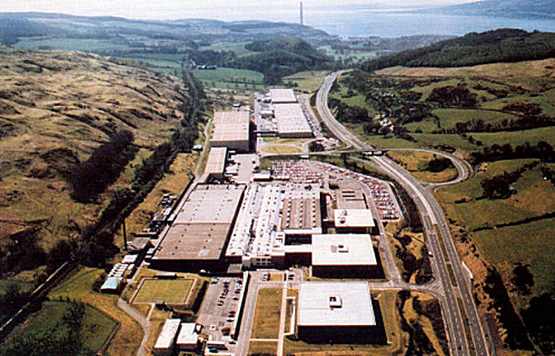 And stay they did! To have survived many decades in the turbulent world of business in general and the world of low cost technology manufacturing in particular is surely a remarkable achievement. Consider that for the largest percentage of IBM’s time at Spango Valley, its employees continued to enjoy working conditions and benefits second-to-none. We will never know how much wealth was generated by IBM during the last 60 years. We can speculate regarding the number of businesses and sub-contractors which were established or grew to get their share of the constantly expanding IBM workload.

By 1999 there were 5,500 people on the Spango site. Indeed there were periods when exports from Greenock were as significant as those of Scotch whisky. Without the constraint of working lines of demarcation. IBM was able to recruit butchers, bakers and candlestick makers giving them the opportunity to pick up diverse skills — and also rise to management positions, as IBM promoted from within.

Readers will be familiar with the much-shown classic Christmas film It’s A Wonderful Life in which the main character is allowed to envision the effect on his family, business and community had he never been born. The result was homes and schools not built, businesses bankrupt or non-existent and instead of prosperity there is general and economic gloom. It’s not a bad metaphor for IBM at Spango. I can remember when the Trumpethill estate in Gourock was being conceived; it was facetiously referred to as IBM Married Quarters — but actually not without some justification.

On 30 August 1954 the first stage of Tom and Hector’s Valley of Opportunity cane to fruition. For many years, IBM’s motto ‘THINK’ was visible all over the Greenock plant. Greenock responded and through creativity, innovation and effort, Spango was soon to become The Valley Of Achievement.