A LOOK Back At… Upper Gourock In The Late 1950s 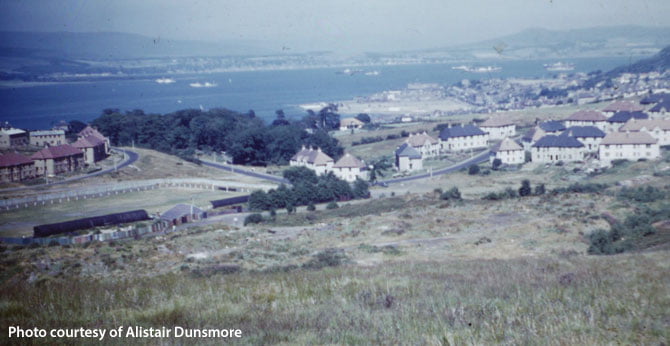 A PHOTO that his father took in the late 1950s showing upper Gourock, including the old Gourock Juniors football pitch, brings back fascinating childhood memories for reader Alistair Dunsmore.

Alistair recalled: “The Gourock Juniors changing rooms were once part of the old Gourock Burgh refuse destructor site and there was a tall chimney tower which was demolished by explosives in June 1955, according to a report in the Gourock Times.

“We lived at that time at 9 Kingsway and our hall window gave a limited view of the football pitch and chimney. I remember us all crowding around the window waiting for the explosion and being very impressed by the large cloud of dust, when it fell. Part of the original wall of the destructor building is still visible on Google Streetview.

“Occasionally, the pitch would be mowed but in later years, three sheep were used to keep the grass short and they had to be rounded up before each game. There was a corrugated iron ‘wall’, about seven or eight feet high surrounding it and, at the west end, it was only about 10 feet behind the goalposts. The ball regularly ended up in the long grass outside so my pals and I would scramble to be first to find it and kick it back over.

“I remember a few of us had sneaked in during one match and the referee was showing a player the red card and sending him off. The guy swung a punch at him and knocked him out.

“Some time in the 1960s, a large tiered stand was built to replace some of the inadequate shelters shown here.”

Alistair added: “This whole area, including the moors and Tower Hill, was our playground and brings back many great memories. At that time, there was no link between Drumshantie Roadd and Kirn Drive, which finished at Staffa Street.

“There was a very large rock near George Road which was called the Fairy Rock and another one, out of the picture to the left, called the Gypsy Rock. We would pretend that these were castles or forts and they had to be attacked or defended.

“Further west, opposite Arran Road, there was an area of the moor where we would search for 0.303 and 9mm bullets from the old rifle range. Most were distorted remnants but sometimes it was possible to find ones that were in perfect condition, as they had missed the targets.

“The area opposite where Bethany Hall now stands was still woodland and behind that, open field. It later became the burgh dump and was then developed as the playing fields. The Gourock Juniors area, which was originally part of Drumshantie Farm, became a red blaes pitch but now has the new St Ninian’s school built on it. Quite a lot has changed over the last 60 or 70 years.”