I PROBABLY have not endeared myself to Hollywood star Scarlett Johansson and the crew of sci-fi movie Under The Skin. They haven’t really been talking to the press and presumably would rather have stayed under the radar as they filmed in Devol, Port Glasgow last month.

I went up there after a tip-off from a reader who lives nearby. She had even done some research on-line about Scarlett and could reveal to me that it was actually the actress’s birthday. A story about Scarlett Johansson filming in upper Port Glasgow would have been enough for me, but on her birthday! – this was tremendous.

Except, after several hours wandering the residential lanes of Muirdykes Avenue, there was no sight of Scarlett; the all-important photo of her in a local setting looked unlikely. There was plenty of evidence of filming – lorries packed with equipment, smart people-movers coming and going and scaffolding at the back of a house with, bizarrely, a white couch on it. But I had to leave not really knowing for sure whether Scarlett had even been there.

It was dark when I returned, just in time to see people hurrying towards the house they were filming in, carrying a box containing a cake that looked like a white van. One person looked to be holding a present and a card.

More wandering around – the hang-around-and-hope-for-the-best strategy. Eventually I edged closer to some filming going on in a narrow lane outside the house. I couldn’t see much and then they finished; the light they had been using was put away and it got even darker. After a while, I turned to leave and was walking away when I heard the familiar refrains of “Happy Birthday To You.”

The crew were gathered round singing and, even though I couldn’t see her amid the crowd and the gloom, I soon got confirmation the film star was there as they reached the line “Happy birthday dear Scarlett”. Fortunately, Scarlett’s voice carried very well as she thanked the crew and uttered the classic line: “I can’t think of a better place to have my birthday!” I couldn’t help wondering what Scarlett’s birthday parties are normally like and how much of a contrast this was. I also couldn’t believe my luck. Two minutes later and I would have missed it.

The next day was wet and windy and I was back in Devol at first ‘light’ vaguely hoping to get a photo of Scarlett arriving. As time passed, I realised that had proved a false hope, but I settled in to watch from the car as some filming activity got underway on a path near Muirdykes Avenue. Amazingly, I was rewarded with a photo of Scarlett soon after, as she was filmed, crossing the road. I think she was probably distracted when she saw me taking the photo and I imagine it ruined the ‘take’. So I can’t see me getting an invitation to the movie’s premiere, or Scarlett’s birthday next year. 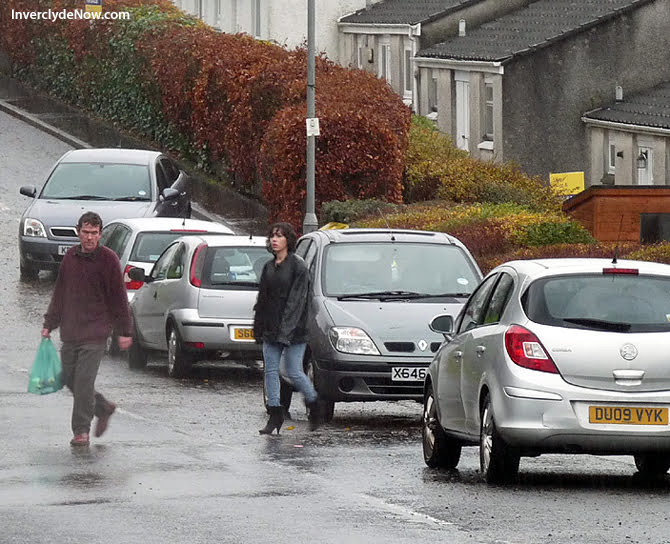 I upset another film crew in Port Glasgow in October 2005. Much of the shoot for the Bollywood-style movie Nina’s Heavenly Delights took place at The Star Hotel, John Wood Street. When I turned up and started taking photos I was asked to leave by a pleasant young lady who I unfortunately had to fall out with. I pointed out that they were filming in a (very) public place and that she couldn’t really stop me. I didn’t have to stay too long to get a photo of the two stars – Laura Fraser and Shelley Conn – outside the hotel (which, for the purposes of the film, had become Indian restaurant The New Taj.) 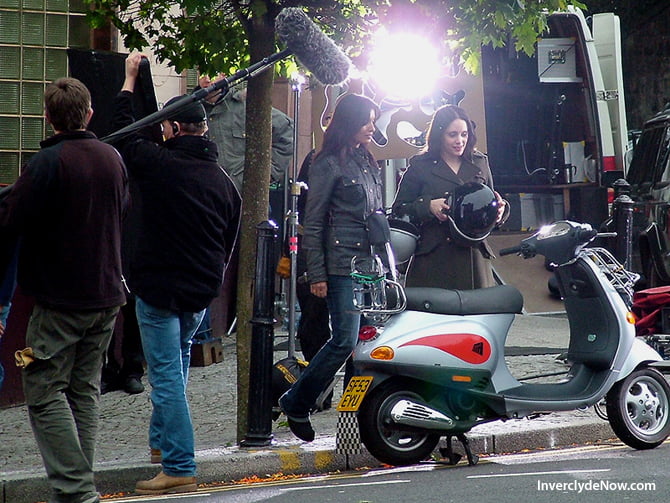 At that point I wasn’t to know how things would turn out for the movie which was being made on a £1million budget, also featured such respected actors as Art Malik and Elaine C Smith, and was written by Greenock-born Andrea Gibb who had scripted the successful Dear Frankie starring Emily Mortimer and Gerard Butler, much of which was filmed in Greenock. 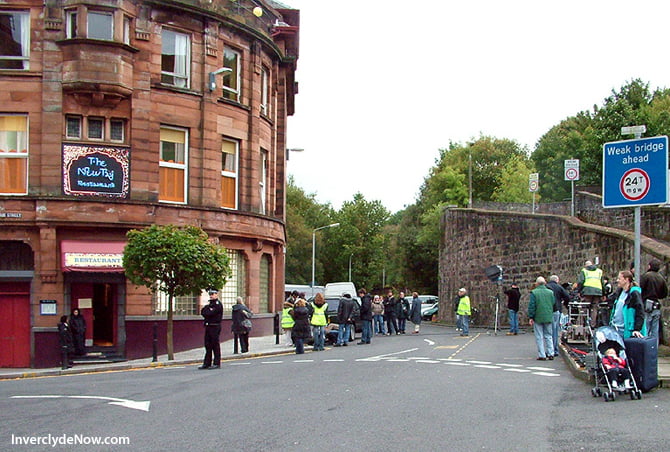 I confess I never saw Nina’s Heavenly Delights but sadly it seems the film was less than a heavenly delight itself as far as the critics were concerned although many viewers have praised it. It was never shown at Inverclyde’s cinema. Last year, its producer Chris Atkins, writing on a blog, gave it this dubious accolade: “The worst film that I or anyone else has produced”. He said it had attracted £250,000 of UK Film Council money “not because it was a good story — far from — but because it was about Asian lesbians making curry in Glasgow, and so the perfect PC trivector.”

He added: “It was a critical and commercial flop, but no matter; we ticked the boxes.” It looks as if, in the Port Glasgow hall of movie fame, Under The Skin won’t have to try too hard to come out on top — and, who knows, aliens, Scarlett and Scotland may be the perfect audience ‘trivector’. (Although I think the Star Hotel would have been a much better venue for Scarlett’s birthday party.)