THE Curtain’s Coming Down For Mark On Organising Kayos

KAYOS Theatre Company’s founding director Mark Barclay is bowing out after more than 20 years of bringing the satisfaction of drama and performing into the lives of many of Inverclyde’s young people. He had a chat with Inverclyde Now writer Jeremy Burrows ahead of his final show, Miss Saigon, being staged this week. 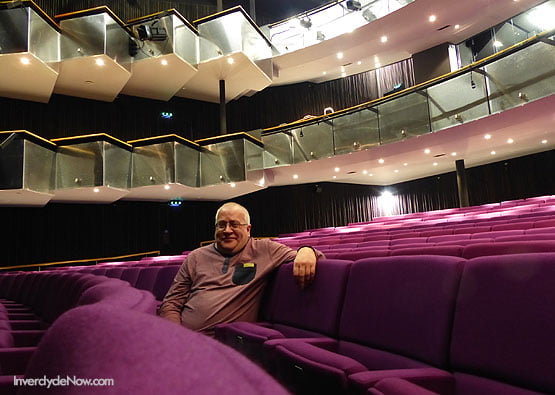 YOU don’t expect Mark Barclay — who has for decades been involved in Inverclyde’s amateur dramatic scene — to say he “hates acting with a passion”. But the stars of Kayos Theatre Company shouldn’t panic — Mark means his acting. Before Kayos, Mark was known to reluctantly tread the boards.

He frankly confessed: “I got so stressed. I was literally sick one time in the dressing room. I have a good voice and can interpret plays but I am stuffy and wooden on stage. Friends have told me I would be wonderful in radio plays and that I look like a stookie on the stage. I only really did small roles when we didn’t have the people. I hated every minute.”

That experience has helped though over the years when faced with young Kayos actors taking stage-fright: “I have been there with them when it’s 10 minutes to go at the side of the stage and their mind’s gone blank. I know exactly what they are going through.” 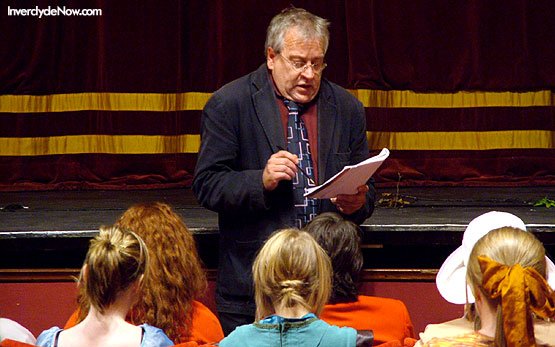 The last show Mark is directing with Kayos is Miss Saigon, on at the Beacon in Greenock this week. It will be watched by up to 2,000 people over four nights but Mark won’t really be one of them. He is too nervous to sit and watch a whole show. The stage crew won’t let him backstage any more — he gets in the way — so over the years he has often been found pacing the theatre foyer trusting that the months of rehearsals have been enough and that his work with the cast is done.

Mark admitted he got involved in shows at school — Gourock High — as part of the stage crew to get out of class but this proved as bad for his health as acting was too later. He said: “I was useless with my hands. One day I was breaking up a piece of scenery with a hammer and a nail flew out and into my forehead. I had to go to hospital.” However Mark proved to be good at organising and became stage manager. The logical progression was directing.

Ironically the night when, in his late teens, he fell in love with theatre properly turned into something resembling a farcical scene from a 1980s British sitcom. It was 1980 and Mark and his friends were returning from the theatre in Glasgow — in his three-wheeler Robin Reliant ‘Only Fools And Horses’-style van. Mark recalled: “We were pulled over by the police. I was a biker then, hair down to my shoulders. The officer asked ‘Where have you been boys?’; he wasn’t expecting us to say the theatre.” Then the policeman noticed how crowded the vehicle was — they had managed to squash seven of them into it. It was obvious by now they weren’t up to no good and he let them on their way.

The group had been at the Theatre Royal in Glasgow seeing Death of a Salesman starring Warren Mitchell who won an Olivier Award for his portrayal of Willy Loman. Mark said: “I only knew him as Alf Garnett [in Till Death Do Us Part and In Sickness And In Health]. It’s still the best performance I have seen. It was so amazing.”

Mark directed plays for George Square Players, highlights being winning the Scottish final of the One Act Play Festival, performing at the British final and getting invited to the world championships in Monte Carlo. In his late 20s, Mark started his own company Pact Productions staging plays such as One Flew Over The Cuckoo’s Nest.

In 1993, while still running Pact, Mark was approached by the then Inverclyde District Council arts development officer Catriona Henderson who wanted to start up a youth theatre group and asked Mark to take it on. Initially there was one group open to 12 to 21-year-olds doing drama workshops and improvised performances. Mark remembers: “We realised the young people wanted a proper end-product, they wanted proper shows, not issue-based pieces. They didn’t want to make stuff up. They wanted to do a musical. They wanted to sing and dance. We ended up doing two shows a year — a musical and a play, giving a chance to those who couldn’t sing.”

The first production was Dracula Spectacular in the Arts Guild Theatre in 1994 and, from the start, Mark introduced the idea of have two casts; principal characters taking it in turn, a starring role one night and appearing in the chorus the next night.

It became apparent that the age group was too wide and a former member, Kirsty McPaul, took on a group purely for those in first to fourth year at school, doing shows in smaller venues. Later yet another group for those aged six to primary seven was added. 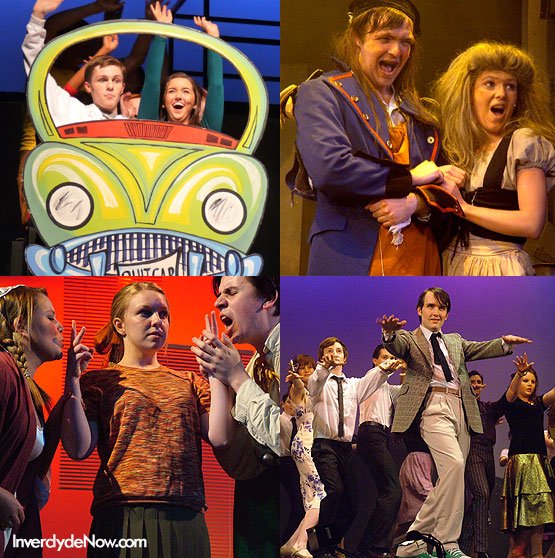 Kayos has left a legacy in the lives of young people. There are enduring friendships and some members have gone on to performing careers; several are working on cruise ships around the world. Others have been able to study at prestigious acting schools in London and New York. Mark said: “I never intended or expected that I was training people to act in the business because it is a crazy business to be involved in, so many people don’t get work. I used to feel a bit guilty because my advice was ‘go and get a degree and then try [acting as a career].’ To me it was about building up people’s confidence, meeting new people, getting them to work together, giving them a purpose,

Some young people would come in and wouldn’t talk to you, sitting on their own. There were young people struggling at school who did learn with us and get confidence, they are out there now and working. That was far more important to me.”

Pamela Barnes will be taking over from Mark meaning all three sections will now be in the care of former Kayos members, testimony to the wisdom of Mark’s decision to let senior members shadow him as he directed shows. The youngest performers — Absolute Kayos — are now led by Ruairidh Forde, with the next age group — Total Kayos — under the charge of Lauren Mortimer.

There are more than 100 children and young people in the three sections. Mark is delighted that Kayos offers such continuity in an age of one-off projects that lose funding after a couple of years.

Mark, who will stay on the Kayos committee, is quick to thank those who have worked so hard for Kayos over the years — Mary Currie, who was his assistant for 10 years; the stage crew, including David Gorry, Hugh Harris, Andy Brodie, Andrew Gerrard and Dugald Carmichael, making sets in the depth of winter in ramshackle store buildings with rain coming in through the roof; other helpers, for example Morag Cumming who looked after the costumes for 15 years. There were volunteer committee members — many of them parents who stayed on helping long after their children left — such as chairperson Margaret Paterson and Liz Irvine, Maria Shearer and Liz Mortimer, who have all served as secretary. Others who had no connection to the group but believed in what it was doing came on board, such as Ian Milne who was treasurer for some years.

When Kayos started, Mark hadn’t actually ever directed a musical. Now he has been at the helm for all the song-and-dance shows he has ever wanted Kayos to do — including Fame three times. Mark’s decision to hand over to someone else has come at just the right time. He points out: “The only show I wanted to direct but hadn’t is Miss Saigon.”