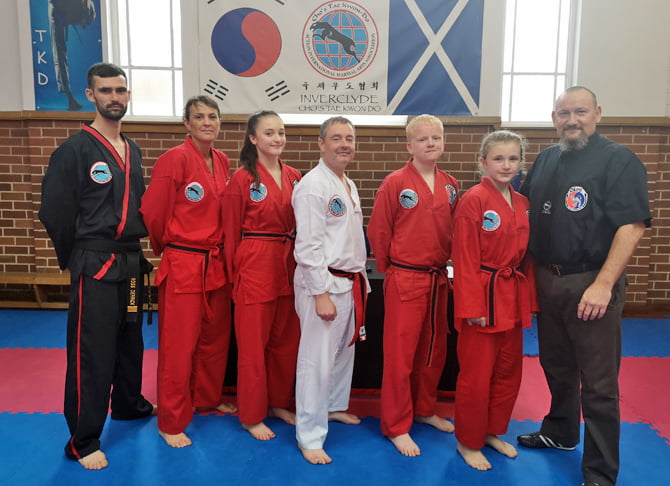 They had all been training intensely since January and had also undertaken three pre-gradings in the previous two months. Students also had to undertake a teaching schedule to enable them to enter the blackbelt ranks within AIMAA (Action International Martial Arts Association).

All students were on the floor for about four hours with only short breaks from time to time to take on fluids. Students were also tested on their knowledge of tae kwon-do and had to submit a 1,000-word essay which was then passed to Grandmaster Hee Il Cho 9th degree and president and founder of AIMAA, who also had the final say on whether or not the students had passed.

Master and Mrs Boyle are proud of all students as everyone put in 100 per cent effort and everything went right for them on the day. The age of students grading was from 12 to 52 years of age.

Anyone interested in joining Inverclyde Cho’s Tae Kwon-Do can log on to www.inverclyde-taekwondo.com or contact Master Boyle on 07901 828863 or Gillian Boyle on 07908 715883 or call in at the training facility at Kerr Hall, George Square, Greenock. Classes are offered to students from the age of 3½ upwards.