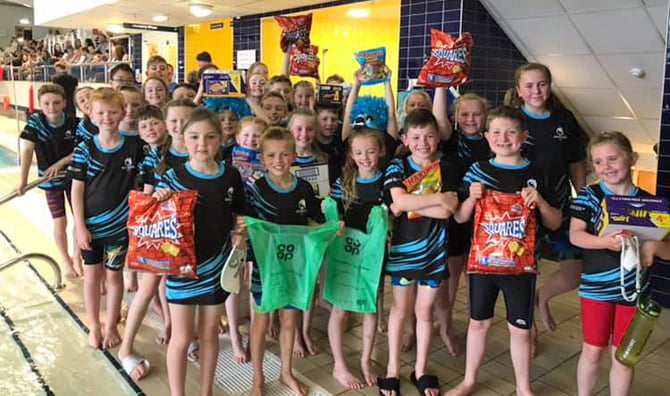 ROUND three of mini league saw Inverclyde Amateur Swimming Club make it three victories out of three to secure their place in the final with a textbook team victory.

Inverclyde were the ‘home’ team but had to host the event in Dunoon because of the broken floor at the Greenock Waterfront pool. Most of the team made the trip across the water several hours in advance to ensure competing teams had space on the ferries.

Set up was stressful and chaotic, but the large army of parent volunteers –- along with the helpers from the visiting clubs of North Ayrshire and West Dunbartonshire –- worked together with the staff team to get everyone in place on time.

Inverclyde were confident going into the competition, but victory was never guaranteed. Both North Ayrshire and West Dunbartonshire had strong teams, and the club knew it would come down to a battle for every point in the close races. A good start in the medley relays saw Inverclyde take 25 points out of the first 30 available. The boys had a perfect start, and the girls’ nine-and-under team were very impressive in their win.

Eight-year-old Finlay Morrice gave an impressive performance swimming up an age group in the nine-year-old boys’ event in the final freestyle leg. Stroke for stroke down the final 25 metres, Finlay fought for every single millimetre against older competition to claim a stunning victory by the narrowest of margins. The gauntlet was thrown down and the team –- and the supporting audience –- responded with roars of encouragement.

In the individual events, the 10 and 11-year-old boys were outstanding once again, scoring maximum points. Luke Garrity and Peter Maloney won all four races for the 11-year-olds, while Archie McArthur and Ryan Cummings took full marks for the 10-year-olds.

Teammates Lukas Kong (11) and Cameron Beck (10) took second place ahead of the competition in all of their reserve swims and aced the relays, proving once again how incredibly impressive and strong the boys are. They fight for every point and are excellent role models for the team.

For the girls, however, things didn’t go according to plan when one of the 11-year-olds took ill. Olivia McNally showed incredible team spirit to finish her 100-metre breaststroke event after losing her goggles and becoming sick during the race. Olivia had to withdraw immediately, but teammates Charlotte Jones and Amy Mearns and younger swimmer Lois Herdman valiantly stepped up to fill the gap. Olivia was devastated to withdraw, but will hopefully return fit and healthy for the final.

For the 10-year-old girls, Mirren McConnell took home full points in the 50-metre freestyle and butterfly with Eve Morrison and Lois Herdman picking up valuable extra points for the team in the breaststroke and backstroke. Alice McClafferty, Skye McLellan and Niamh Ward also gave excellent performances in the relays and reserve swims.

In the nine-year-old age group it was a real battle across boys and girls, with Inverclyde coming out on top. The boys -– Scott Brodie and Josh Docherty -– won 18 points out of 20, with Oliver Jones and Logan O’Donoghue putting in impressive performances for the club in the reserve lane.

The nine-year-old girls –- Sophie Campbell, Eilidh Melrose and Isabella McClafferty –- matched the boys’ score. Eilidh’s breaststroke race was another photo finish in which she fought with everything she had to claim the win. Abi McAnerney made a very impressive mini league debut and Beth Nichol and Ellie Atkinson also put in strong performances in the reserve lane to outswim the competition in many events.

Comprising of a mix of seven and eight-year-olds, the youngest age group showed exciting promise for the future. Finlay Morrice and Blake Herdman took 18 points out of 20 for the boys’ team, while Brodie McAthur, Charlie Lyne and Oliver Gibson also put in excellent performances throughout the afternoon.

The girls’ team were also hampered with illness, with Taguen Maloney battling toothache. They managed to keep their spirits up, with Taguen and team-mates Ella Morrison, Mirrin Fay, Nina Hawthorne-Smith and Olivia Lyne all performing well to make a valuable points contribution.

The score check before the final relays showed how tight the competition was, with only 22 points separating Inverclyde from North Ayrshire. With 40 points available, Inverclyde focused their efforts, and, with a wall of sound in support, were roared home to a win a vital 33 points. Every single swimmer gave it everything.

Initially, team manager Clare Beck was just grateful the event took place successfully. She said: “We have a long-standing commitment to the mini league competition to host a match. Because of the ongoing issues with the broken pool floor we weren’t able to do that at the Waterfront. Thankfully the great team at Dunoon pool were happy to help us.

“Hosting a competition in a pool you’re unfamiliar with is really difficult. We had to set everything up from scratch within 30 minutes. But the staff at the pool were absolutely amazing. They helped us far more than they would have been expected to. They really made us feel at home and worked with us to overcome issues. Their customer service was truly exceptional and we are so thankful for their support.

“The teams we were competing against were also amazing. The coaches and parent volunteers all pitched in to help with the set-up. It really was a group effort, and we’re really grateful to them as well for their patience and understanding. We know we’ve made the final, and we hope they have too.

“We also want to thank the Co-Op in Shore Street in Gourock who made a very generous donation of food and drink to us to give to the visiting swimmers; it was massively appreciated.”

Reflecting on the team’s performance, the coaches said: “We were really challenged in this round, and had to fight for points like never before, but it’s the best thing that could have happened. Seeing that will to win was inspiring.

“We’ve got a good track record in the final –- we came third last year and second the year before –- but that means nothing on the day. We will need to fight for every single point. Knowing that desire is there already creates a ripple effect in the team and spurs everyone on.

“The next couple of weeks will be spent working on the details that we can improve. Hopefully our team will be back to full strength and we can challenge for a medal in the final.”