A large field took part with 15 teams of four competing in the shotgun start Texas Scramble format, the teams randomly selected by ballot on the morning of the competition.

Conditions throughout the day were mixed with high, blustery winds and fast greens making scoring unusually difficult for this type of event.

However the winning team of Kenny McNeill, William Rudge, Iain McPherson and Brian Smith handled the tough conditions better than most. With a very impressive score of 54 (which included eight birdies) they were a full four shots better off than their nearest rivals.

Winter League convenor Evan Conway led the presentation party and thanked all who participated over the gruelling winter months. The league is growing in popularity each year and with more than 50 members competing this time around it was one of the more competitive leagues to date.

Previous winner Stephen O’Kane led after the first few weeks with some impressive early scoring. However, with a format of best 12 combined Stableford scores over the season, the top of the table quickly became quite congested with the leader changing from week to week.

Eventual winner Ian Hendry topped the table with only a few weeks remaining and, going into the final week of play, only three point separated him from O’Kane in second place. However, a heavy snow storm rendered the course unplayable so the final weekend’s play had to be cancelled, confirming Hendry as this years winner. 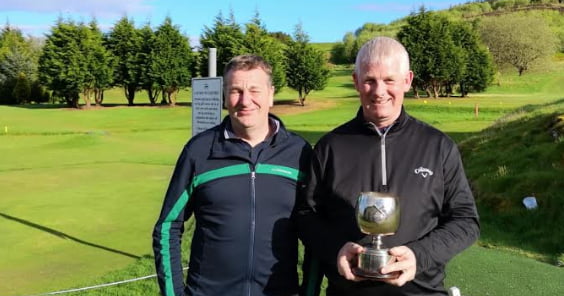 Sponsorship opportunities for events of this type are available — for more information email matchsecretary_pggc@outlook.com