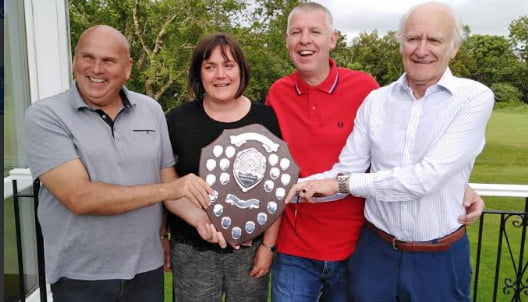 With the course in excellent condition and favourable weather conditions, scoring was very competitive.

The first prize in the ladies’ section went to Norma Ramsay and her partner Trixie Brown from Gleddoch GC who returned an impressive nett 71 including six nett birdies.

In the gents’ section, local player John Lynn together with his partner Gavin Loggie got off to a flying start with a nett eagle three at the first. They went on to muster six more birdies for a nett score of 67 which was to see them eventually take third prize, losing out on second spot under the better inward half rule.

The runners-up were Sean Parsons and his visitor Mitchell Ogilby with their round of nett 67 including a gross hole-in-one by Sean at the short fourth. Sean and Mitchell added another seven nett birdies including a strong run in the home straight for a nett score over the last nine holes of 33.

As it turned out, the last game delivered the winning score with Gourock member Robert McGregor and his regular visiting partner Stephen Wilkie from Greenock GC storming through the field with an unbeatable nett 63 to win the trophy by a clear margin of four shots.

Robert and Stephen delivered seven nett birdies plus two very impressive nett eagles at the 12th and 15th holes with only one shot being dropped to par at the fifth hole. This was a great win for Robert and Stephen which follows up on their T O’Neill Trophy success at Gourock during the 2018 season.