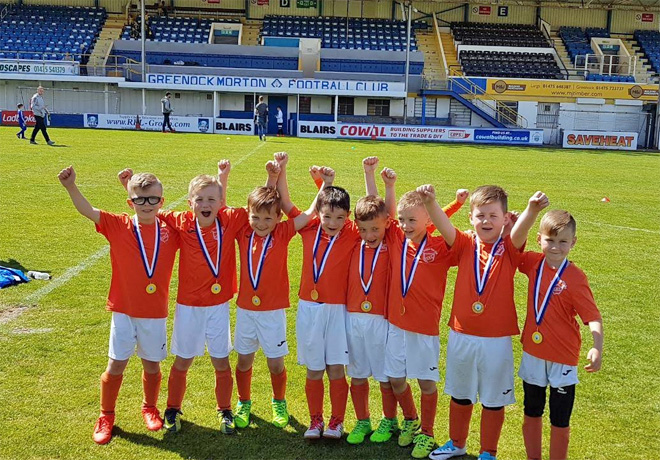 The 2009 and 2010 teams, pictured above and below, played at Cappielow Park on Sunday in a local tournament. 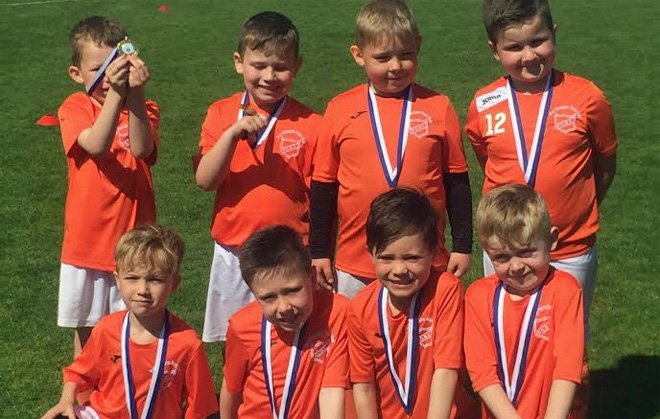 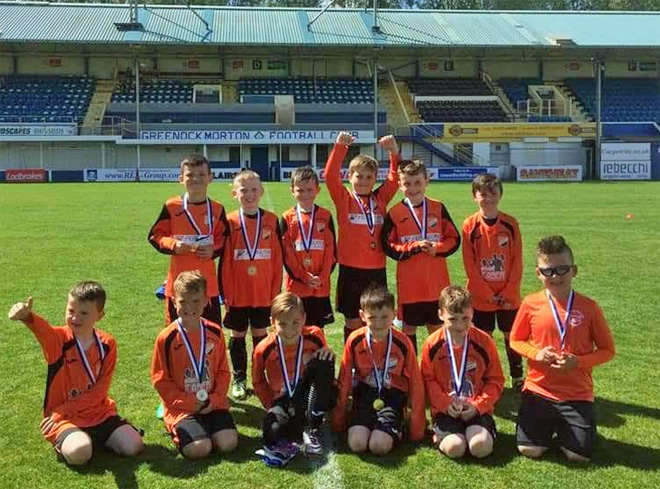 2008s — The team was in action against a strong St Peter’s side. The team lined up with attack in mind. Leo and Logan were tasked with getting down the wings and making opportunities for forwards Sam and Cameron. This tactic bore fruit early on as Kieran and Logan provided brilliant finishing to give the boys an early lead. Oliver again was in charge of the defence ably assisted by Max and Leo. Throughout the whole match they let no one get past them, providing clearances and working closely with Euan in goal. Oliver’s distribution was brilliant to watch and he the rest of team were much more confident knowing the back line was solid. The team continued to press in the second half and, after missing a few chances, Sam was able to pounce on a loose ball to score the third goal. This was the end of the scoring and, in the latter stages, Euan was busy securing a clean sheet. This was another fantastic team performance from the 2008s

The team played their final two games of the season in the Second Division against St Cadoc’s and Pollok. Both games were played away from home and first up on Wednesday night was league leaders St Cadoc’s. The Port weathered an early storm with St Cadoc’s having the majority of the ball and hitting the bar before the Port finally got going. Darren McLeay opened the scoring for the Port with a fine finish. The Port took control of the midfield and Jamie Gilmour was winning most balls. It was early in the second half when the game changed as Gilmour went off with a twisted knee and St Cadoc’s then scored a quick double to take the lead. Although the Port had a few chances to take a point they couldn’t make them count. Man of the Match was Kyle Fuller. On Saturday the boys completed their season with a 6 – 1 win at Pollok. Darren McLeay took his tally to seven goals in three games with a hat-trick for the Port. A double from Devlin Anderson and a fine strike from Niall Brady sealed the win. The Port players deserve credit for keeping their cool and letting their football do the talking. Man of the match was Thomas McKeown. Scorers: Darren McLeay (3), Devlin Anderson (2), Niall Brady  |  The team thank sponsor Marcus Humphrey

The Port travelled to play Renfrew on Wednesday night in a league match in Renfrew. The team kept up their winning run but were made to work for it by a good Renfrew team. With the recent good weather, the pitch was very firm and this made it difficult for both teams to get the ball down and play any football.  The first chance fell to Renfrew who launched a free kick at goal, attempting to make use of the low sun in the goalkeeper’s eyes and the bouncy pitch, but McDougall was alert to this and managed to touch the ball over the bar. The sun however played a big part in Renfrew taking the lead when a long ball was launched into the Port half. The defence lost the ball in the sun and the Renfrew player reacted first to fire a shot across goal and, despite a touch from McDougall, it came off the inside of the post and into the net.

The Port were struggling to get on the ball but got themselves level after determined work by Emmerson down the left saw him cross the ball in for Smith to touch home through the keeper’s legs. Despite protests from the Renfrew side-lines, claiming the ball hadn’t crossed the line, the goal was given. The Port were in the ascendancy now and it wasn’t long before Madden put the team in front with a shot from 20 yards which looped over the keeper. Renfrew resorted to a few meaty challenges in the second half and the Port players did well not to react. They answered however in the best possible fashion when Darroch fired a free kick into the top corner from out on the left. Renfrew kept plugging away but found McDougall, McLaughlin, Scott and Harkins determined not to lose another goal as they repelled numerous long balls, with Emmerson, Madden, Weston, McAteer, Creen and Baxter battling in midfield to try and get on the ball, and Darroch, Smith and McDonald working hard to close the Renfrew team down. The game finished with the Port victorious 3-1. Scorers:  Smith, Madden and Darroch  |  The team thank sponsors The Barber Shop (Greenock), Harkins Financial Services and Michael Stevenson