GREENOCK completed their pre-season preparations with two matches at Glenpark over the weekend and, while the team performances were not what might have been hoped for, there were encouraging individual efforts which at least offered supporters some positives before the season proper begins this coming weekend.

On Saturday, Hillhead travelled down from Glasgow for what has become a regular, annual friendly prior to the start of league business. Greenock fielded a mix of experience and youth and with the weather spectacularly good for April, decided to bat when the toss was won.

The local side’s innings did not start in the same fine vein, however, and after just ten overs the scoreboard provided a less than ‘sunny’ outlook with three wickets down and just 24 runs on the total.

Former captain, Shailesh Prabhu who opened the batting, spent a good spell at the crease and accumulated 30 runs in a useful innings which included four boundaries.

Chirag Pandher, coming in at number six in the batting order, also displayed some fine form, mixing some good defensive batting with aggressive attacking play which fairly accelerated the run scoring. He arrived at the crease with the team score on 36 for the loss of four wickets and departed with the score on 96 just 14 overs later having hit six boundaries and also a maximum straight six into Fox Street in his innings of 39.

Rod Mountford with 13 not out was the only other Greenock batsman to get into double figures as Greenock finished the innings on 119 all out. Yadav with 3 wickets for 13 runs from 8 overs, Howard 2 for 17 and Khan 2 for 13 were the top bowlers for the Glasgow side.

A wicket with the third ball of the Hillhead innings, when Sam Sanghera trapped Bartlett leg before wicket (LBW), was the perfect start for Greenock, but it took until the 13th over for a second wicket to be captured and once again it was Sanghera who gained an LBW decision with the score on 35.

Mahmood and Azhar then produced a match-winning 88-run unbeaten partnership to comfortably win the match by eight wickets for the visitors. But it could have been a quite different outcome had the hosts taken any one of four good catching opportunities. Mahmood was first dropped when on 34 and went on to reach a very fine 85 not out, while Azhar also benefited from some early season ‘dropsy’ as he scored 24 not out in a very useful supporting role.

The fine, warm and sunny weather continued into Sunday for Greenock’s game with a useful West of Scotland side, and once again the Glenpark team was a mix of experience and youth, but with several changes from Saturday’s match. Unfortunately, the home batting form was largely absent once again. However, Greenock’s young Aussie amateur Zac Barrenechea provided an innings of promise, as he showed that he will be a player to watch with a well-constructed 38 runs as opening bat.

Only Jonathan Hempsey, with 16 runs to his name, managed to score into double figures as Greenock slumped to just 84 all out against a West bowling attack which was much too strong for the Glenpark side which featured at least six players who will be likely to play much of their cricket in the 2nd XI during the season. Farndale with 3 wickets for 4 runs and Brown with 3 for 13 were West’s top performers with the ball.

After the tea interval, Greenock made an early breakthrough when Jonathan Hempsey had Corner caught by young Lukas Fischer-Keogh in the opening over of the West reply. Hempsey picked up two further wickets in his bowling spell to finish with 3 for 43 but in truth it was a very easy win for West as the Glasgow side cruised past Greenock’s score with only the three wickets down. Miller 27, Young 26 and Fennah not out 17 were the batsmen who gave West their comfortable win.

Indian professional Saurabh Bandekar arrives on Tuesday and will add significant strength to the Greenock team with both bat and ball, and if most of the recognised 1st XI side are able to play, Greenock will look forward to next Saturday’s opening Premier Division fixture when a much higher standard team performance should be the order of the day against East Kilbride.

Before the start of the match against Hillhead on Saturday, both teams lined up together on the field of play to remember Scotland international cricketer Con de Lange who died of a brain tumour on Thursday evening of last week at the age of just 38. 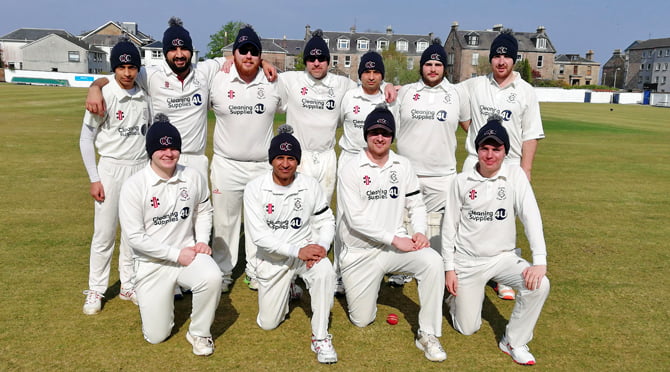 The Greenock team wore their Brain Tumour Charity ‘Beanie’ hats purchased by players around the country, and in commemoration of Con who was highly respected as a professional cricketer and as a person by all who had the privilege to know and play with or against him. He leaves his wife Claire and two young children.