RESIDENTS who want to stand in Inverclyde’s community council elections have until 4pm on Monday 16 September to submit their nomination papers.

Anyone 16 and over who is registered to vote in the relevant community council area can stand for election. Community councillors serve a four-year term of office.

Anne Ross, chair of the Port Glasgow Community Council, said: “Years ago one of my colleagues mentioned that she was on the local community council. I’d never heard of such a thing. But then I looked into it and got involved. That was in 2004!

“A lot of people don’t realise we’re here or what we do. The community council gives local people a voice and a way of making their views known about everything from the environment to education. Anything and everything comes up from crime to fly-tipping.

“But the community council isn’t just a talking shop. We have power and we use it for the benefit of the local community. It’s interesting and informative. We’re looking for people with a wee bit of time and a bit of commitment.”

Councillor Jim McEleny, Inverclyde Council’s community council champion, said: “Community councils are made up of people who care about their community and want to make it a better place to live.

“Community councils are non-political and are independent from Inverclyde Council. They act as a link between the council and local communities. Local authorities have to consult community councils on planning and licensing issues.

“They play a very real and important part in how the democratic system works in Scotland and anyone who is concerned about their neighbourhood should think about joining their community council.”

Community councils normally meet once a month and there is usual some correspondence to deal with as well.

Nomination forms are available online.  Completed forms should be delivered to Inverclyde Council’s Customer Service Centre at the Municipal Buildings, Clyde Square, Greenock, PA15 1LY. and should be marked for the attention of the Head of Legal and Property Services.

Each community council has a maximum number of members, as shown below. Where the number of nominations is more than this, there will be an election. These will take place between 7pm and 9pm except for Kilmacolm Community Council, where any election would be between 7.30pm and 9.30pm. 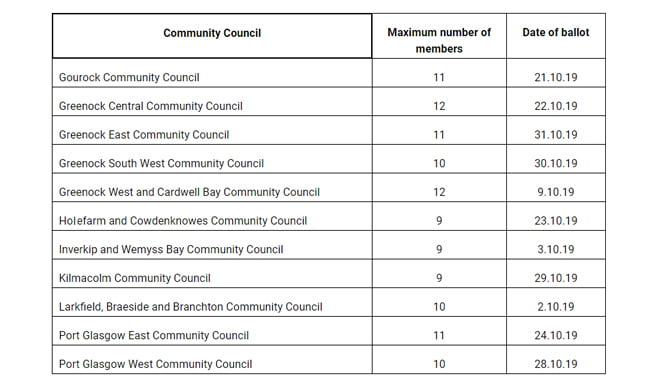