BUS services on the A78 coast road will be terminating at Wemyss Bay for the next two weekends (6/7 April and 13/14 April) because of resurfacing work between Skelmorlie and Largs. 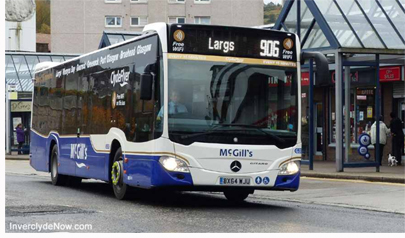 The McGill’s 901 and 906 routes from Inverclyde to Largs are being cut short as the road will be completely closed to traffic.

The company will be operating a shuttle bus from Braehead to Largs via Beith and Kilbirnie on an amended timetable for its 904 route.

The road is due to be closed south of Skelmorlie at the following times:

Narrow country back routes Routenburn Road and Loch Thom Road will be restricted to local access only.

|  Previous story about the roadworks