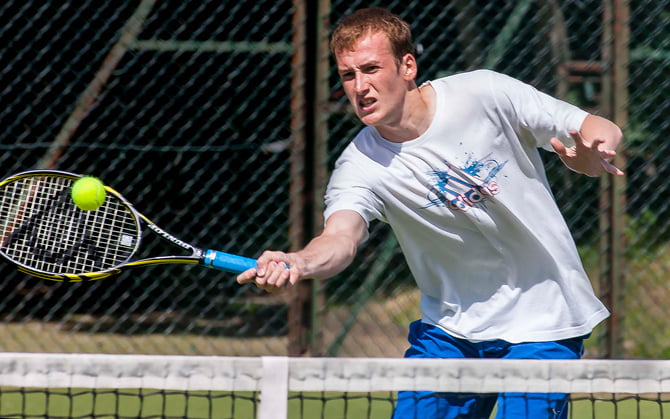 ENTRIES have opened for the 71st Greenock and District Tennis championships which take place over the fortnight from Monday 15 July to Saturday 27 July.

The finals will be held at Fort Matilda Tennis Club in Greenock on Friday evening 26 July and Saturday 27 July.

There will also be under-12, under-14, under-16 and under-18 boys’ and girls’ singles competitions as well events for five to eight-year-olds, nine-year-olds and 10-year-olds.

The clubs involved in the championships are Ardgowan and Fort Matilda Tennis Clubs in Greenock, and those in Bishopton, Kilmacolm, Largs and Skelmorlie plus players with a normal Inverclyde residential address who may be members of other clubs.

Tournament organising chairman Chris Jewell said: “Tennis is really on the up in Inverclyde with the plans for three indoor courts [at Rankin Park] hopefully reaching fruition very shortly and the work the Judy Murray Foundation is carrying out here to build an army of coaches to deliver tennis sessions, given the expected demand for tennis coaching as we go forward.

“We also have Stephanie Swan as head coach and development officer covering both Greenock clubs who is helping to increase membership levels and coaching opportunities and we are greatly looking forward to another very successful championships.

“Thanks are due again to Inverclyde Leisure as sponsors. We encourage all players from all the clubs involved to enter as many of the competitions as they can of these local championships which are sure to again provide many exciting matches.” Entry forms are now available from all the clubs involved or can be obtained by email from Chris Jewell at cbjjewell@gmail.com.

Entry forms must be received for the adult competitions by Thursday 4 July with draws announced on Thursday 11 July.