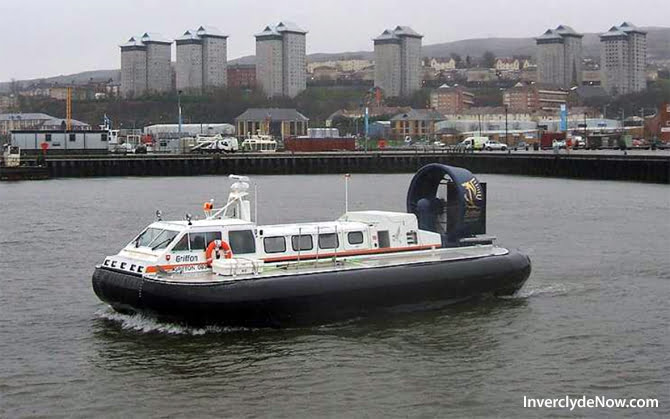 The hovercraft at East India Harbour, Greenock in March 2008

TEN Years Ago — A trial to see if passenger hovercraft could operate on the river between Inverclyde and Glasgow was held.

Transport company Clydefast tried out a 12-passenger hovercraft on the Clyde for three days.

Two round trips per day ran between the Scottish Exhibition and Conference Centre pontoon in Glasgow, Braehead, East India Harbour in Greenock and Dunoon.

The hope was that a permanent service would operate to/from Glasgow Broomielaw, Braehead, Greenock, Dunoon and Rothesay carrying up to 130 passengers per trip, but nothing ever came of the scheme.

Hovercraft had last seen regular use on the Clyde in the late 1960s.

Alistair Macleod, chief executive of Clydefast, said at the time of the trial in 2008: “We are very excited about the test and indebted to Glasgow City Council, Riverside Inverclyde and Strathclyde Partnership for Transport (SPT) for making the trial possible.

“It will hopefully demonstrate the potential for a permanent hovercraft operation to be brought to the Clyde. The service will be fast – for example a service from Dunoon to Glasgow will reach the city centre in 52 minutes, over 20 minutes quicker than the present journey time of an hour and a quarter (by train and ferry). Rothesay will be included in a permanent operation which would add a further 15 minutes to the journey.”