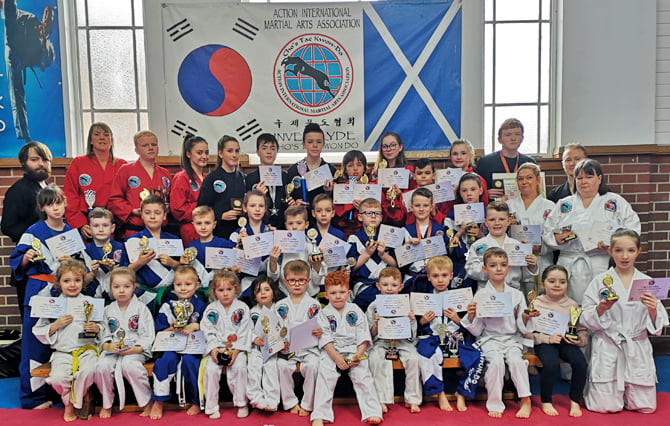 The competition was held at the club’s full-time studio at 11A George Square, Greenock. The tae kwon do school is run by Master Charles and Gillian Boyle, with more than 60 years experience between them.

The club hold events like this so that students can get a taste of competing in patterns and sparring at a lower level before going on to the bigger competitions.

Thirty-seven students from the club took part. Everyone received a trophy with the winners receiving an extra certificate for 1st, 2nd and 3rd place. The club thanks senior students who helped out on the day.

Competitor of the Year

Anyone interested in joining Inverclyde Cho’s Tae Kwon-Do can log on to www.inverclyde-taekwondo.com or contact Master Boyle on 07901 828863 or Gillian Boyle on 07908 715883 or call in at the training facility at Kerr Hall, George Square, Greenock. Classes are offered to students from the age of 3½ upwards every Monday, Wednesday and Friday. A free trial week of classes is available.