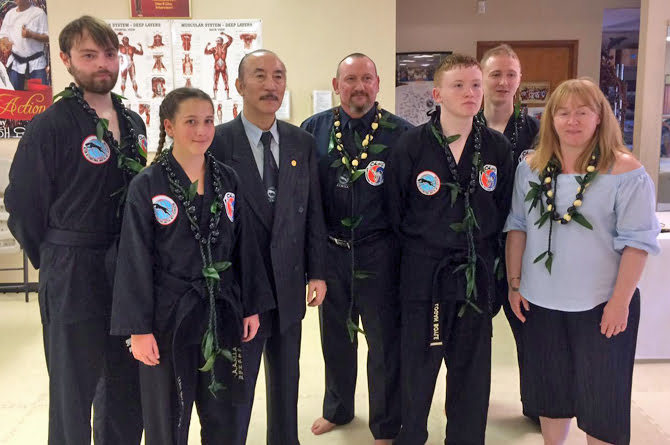 A GROUP from Inverclyde Cho’s Tae Kwon-Do made the long trip to Hawaii to train with a grand master.

Master Charles Boyle, his wife Gillian and 16 members of the club went to the headquarters of AIMAA (Action International Martial Arts Association) in Honolulu Grand Master Hee Il Cho, AIMAA founder, president and chief instructor is based there. He is considered one of the leading and most innovative teachers of tae kwon-do and the martial arts.

Two years ago the Inverclyde group decided they would like to be able to train with Grandmaster Cho (as he no longer travels) and also give four students the chance to grade under him at the 18th International Black Belt Testing. 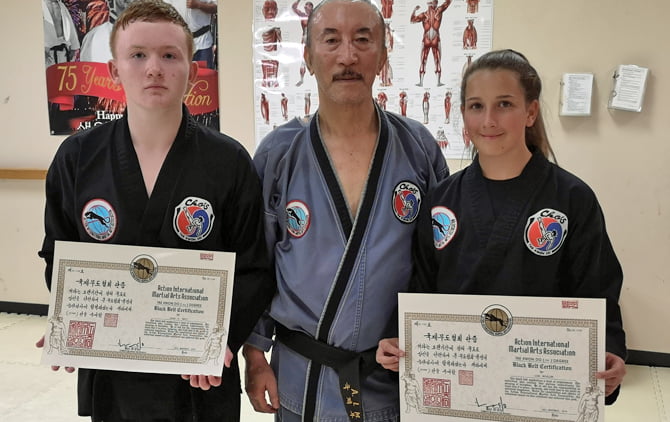 The test was rigorous — each participant performed patterns, AIMAA curriculum, one-step sparring, self-defence, sparring, board breaking as well as theory on all parts of Korean history and it’s influences in tae kwon-do, as well as being asked about their essays that they had to submit.

The group had a full week of training with the grand master before the testing so they could adjust to the heat and humidity. All students and family members had such a fantastic time that they will all return again in two years to train with Grand Master Cho again.

Master and Mrs Boyle thank all student and parents who travelled and to all other members of the club for their help in fund-raising efforts. The club thank Maria Docherty and Texas instruments Community Care Team for their kind donation.

Anyone interested in joining Inverclyde Cho’s Tae Kwon-Do can log on to www.inverclyde-taekwondo.com or contact Master Boyle on 07901 828863 or Gillian Boyle on 07908 715883 or call in at the training facility at Kerr Hall, George Square, Greenock. Classes are offered to students from the age of 3½ upwards every Monday, Wednesday and Friday. Free trial classes are available in December.