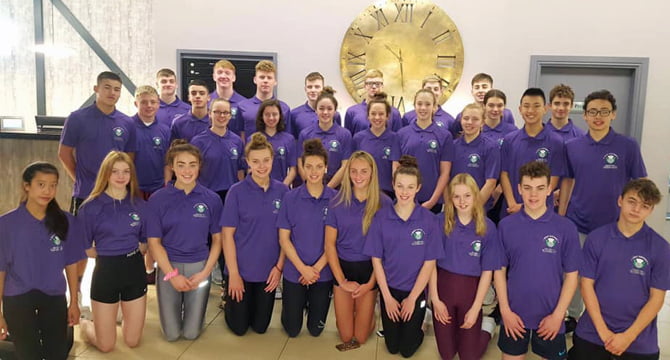 The contest is a UK-wide event for regional swimming teams and the Scotland West team is made up of swimmers from clubs as far afield as Oban and Stranraer. This year’s event was held in Sheffield with 39 counties and more than 1,000 swimmers taking part.

Scotland West finished as runners up in last year’s competition, but a large number of new swimmers in the team meant this year’s ranking was far lower. The team outperformed expectations racking up a record 22 top 10 finishes –- including five victories –- to claim equal fourth place.

For the Inverclyde pair, it proved a successful meet. Aimee was swimming the breaststroke leg of the girls’ 14 to 15 years, 200-metre medley relay. Seeded fourth, the team stepped it up a gear to power home to a big win in the final, taking victory over their nearest rivals by nearly two seconds.

Matthew was swimming the boys 14 to 15 years, 100-metre breaststroke and the breaststroke leg of the boys’ 200-metre medley relay. In the individual event, Matthew swam a great race to finish sixth overall, matching his performance from last year and achieving a new personal best. In the relay event the team put in a solid performance to take sixth place.

The club’s head coach Shirley Reford was once again asked to be part of the coaching team for the event and was delighted with the performance. She said: “The team spirit was amazing and, considering there were 14 rookies in the team, the result far exceeded our pre-meet ranking and expectations. All the juniors swam brilliantly, helped by the team ethos and atmosphere which was electric throughout.

“Every single member of the team played a part and the younger members soaked up the experience with the support and guidance of the rest of the others.”

IASC is holding an October assessment — those interest can get more information by emailing membership@inverclydeasc.co.uk.