Matthew was awarded his certificates following the West District’s annual general meeting at the end of November, although he actually broke the records when he competed in the Scottish National Age Group championships (SNAGS) back in March. 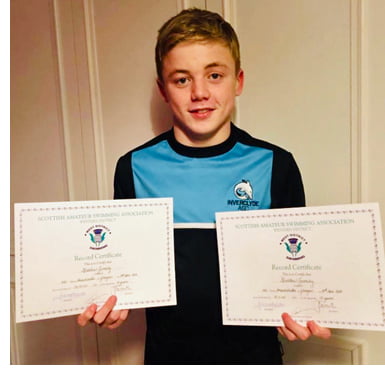 Having been crowned the 12-year old West District record-holder in the 200-metre breaststroke last year, the pressure was on to see if he could challenge for the 13-year-olds’ record. Swimming in the prestigious SNAGS competition, Matthew won the 200-metre event to become Scottish champion and earned a brilliant silver medal in the 100-metre event. Both swims saw him smash his previous best times and claim the coveted new West District records.

Matthew said: “It was a nice surprise to be handed the certificates at the weekend. After getting the 200-metre record last year, I was really pleased to get them both this time around. My focus now is on the Scottish national short course championships in Edinburgh, where I’m hoping to PB [personal best] in all my events and maybe challenge for the short course (25-metre pool) records.”

Club head coach Shirley Reford said: “Seeing his name in the record books alongside one of the greatest swimmers our country has ever produced really brings home just how special Matthew’s talent is. It motivates everyone in the club –- other swimmers see his success and think ‘I want a piece of that’.

“Achievements that once seemed impossible for a small club like ours are now within reach and we have a superb coaching infrastructure in place to help our swimmers reach their goals. We are all incredibly proud of Matthew’s achievements.”