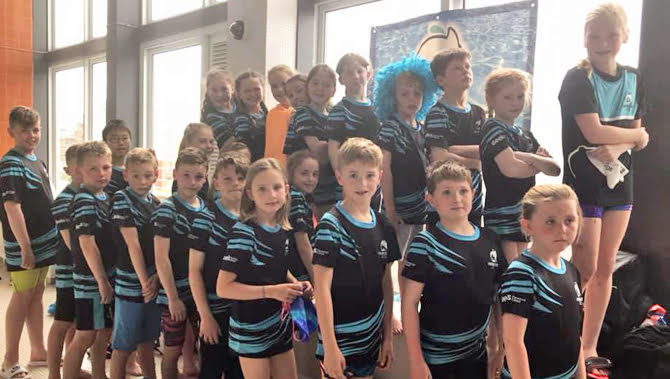 Victory in each of the three qualifying rounds earned Inverclyde the second qualifying spot, but the level of competition in the final was far, far tougher and nothing was guaranteed for any team. 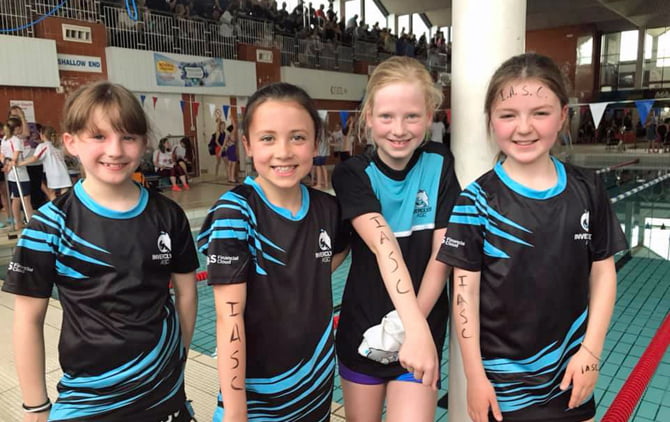 The atmosphere at the pool was incredible before the racing even started. Mini league events are always noisy and exciting, but the final takes the excitement –- and the tension -– to a whole new level. Drums, bells, horns and cheers helped create a carnival atmosphere. There was no need to motivate the swimmers -– the whole team was ready to give it everything. 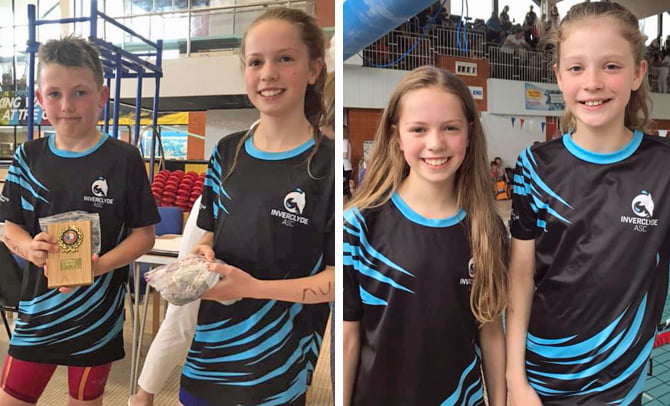 The six medley relay events were up first, getting the competition off to an exciting start. Inverclyde had dominated in the relays in the qualifying rounds, but both Ren 96 and City of Glasgow had incredibly strong teams. A great start saw the nine-year-old girls’ team take second place with the boys following up with a third place. The 10-year-old boys’ team took another second place and the 11-year-old boys’ team came third in their race. The 10 and 11-year-old girls’ teams were both desperately unlucky to be beaten to fourth place by a fraction of a second in some incredibly close racing. 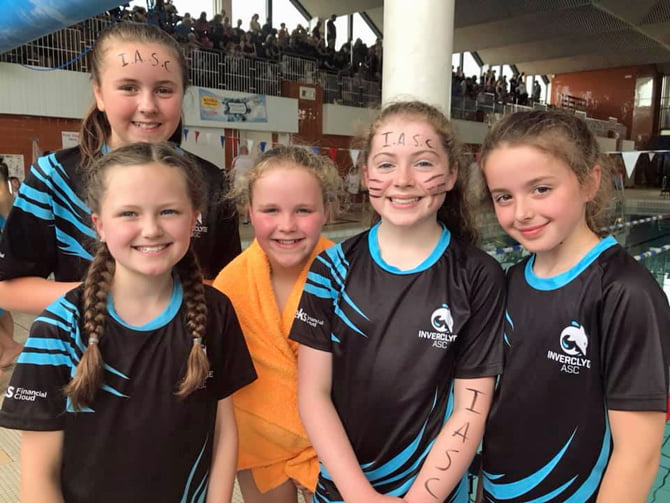 Even after six events, it was clear that Ren 96 and City of Glasgow were performing strongly and would be battling it out for the win. It was also starting to look like Inverclyde and North Ayrshire would be fighting for the bronze medal spot. A scores update after the first round of individual events put Inverclyde in third place with a slim lead over North Ayrshire.

Throughout the individual swims, Inverclyde managed to secure some impressive victories. Nine-year-old Scott Brodie started the winning streak with victory in the 25-metre butterfly, and later added a win in the 25-metre freestyle. In the 10-year-old category, Archie McArthur also did the double, winning the 50-metre backstroke and 50-metre butterfly. Luke Garrity took first and second in the 11-year-old 100-metre breaststroke and freestyle, followed by victory for Abi McAnerney in the nine-year-old girls’ backstroke. Ryan Cummings completed the wins by taking full points in the 10-year-old 50-metre breaststroke. 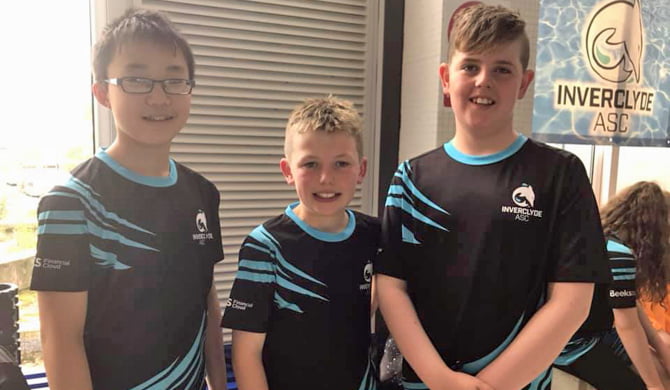 Points continued to add up in the individual events and there were a number of good second and third-place finishes. Finlay Morrice secured two second places in the eight-year-old 25-metre freestyle and breaststroke, with Blake Herdman taking another second spot in the 25-metre butterfly in the same age group. Ten-year-old Mirren McConnell also made it a double with second-place finishes in the 50-metre freestyle and butterfly. Nine-year-olds Sophie Campbell and Josh Docherty took second in the 25-metre butterfly and backstroke. 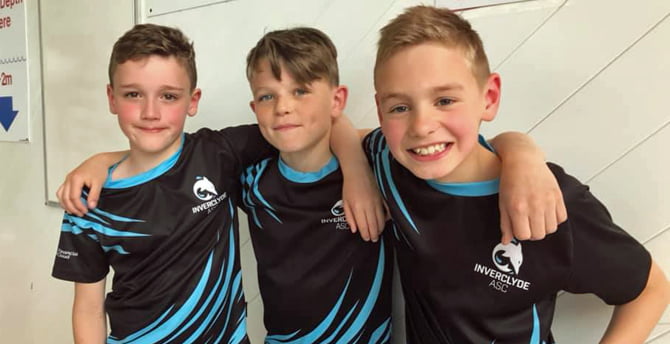 By the end of the individual swims, Inverclyde had extended its lead over North Ayrshire, but with eight more relay events remaining, it was all still to play for. Inverclyde kept the momentum going and were able to bring in some fresher swimmers for an extra burst of pace.

With the rest of the team and the support crew screaming them on from poolside and roars of encouragement from the spectators, Logan O’Donoghue, Alice McClafferty, Skye McLellan, Cameron Beck and Lukas Kong took full advantage of their fresh legs and helped extend the lead and power the team home to a brilliant third place.

Taking it to the very last race of the day, Ren 96 won out over City of Glasgow by just three points. The final scores were: Ren 96 238 points; City of Glasgow 235 points; Inverclyde 187 points; North Ayrshire 165 points; Kintyre 97 points; Scotia 88 points.

Coach Kyara Finlay oversees the mini league team and was ecstatic with the result. She said: “Thanks to our amazing group of kids we’ve had another great year at mini league. The dedication and determination that each and every swimmer has put in is outstanding, and it amazes the coaches more and more each year. I’m so proud of them all.

“I’d like to say a huge thanks to our coaching team of Andrew Hemphill, Kelsey Finlay, Laura Mearns and Andrew Dyer. Thanks also to Claire McArthur and Clare Beck who have managed the team in every round.

“A special thanks to all of our volunteers who help in timekeeping, judging and all the many roles that are required for these events to run smoothly. Thanks also to our sponsors Beeks Financial Cloud for our amazing kit.

“Finally, I’d like to thank all of the mini league parents in the club for their dedication to the kids’ training and being so accommodating with having to travel to Drumchapel for practice.” 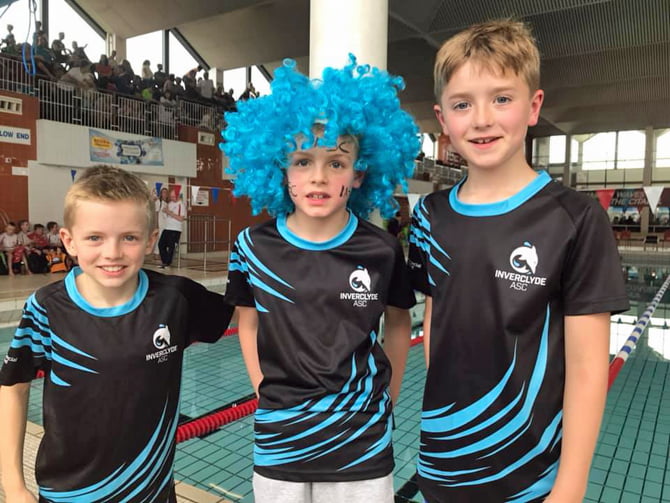