GREENOCK parkrun celebrated as two of its most devoted participants completed their 250th runs.

Graham McGrattan and Richard Hodelet were among seven runners achieving milestones on what was a ‘Super Saturday’ at the weekly five-kilometre event on The Esplanade.

Graham and Dick started their parkrun journeys around a decade ago and have both been focused on reaching the 250 target despite numerous injuries and health concerns getting in their way. 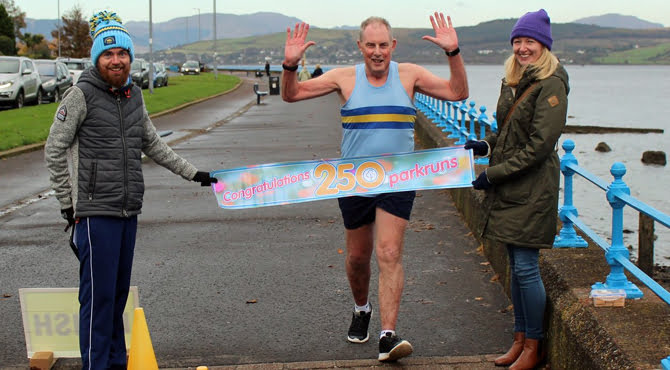 Dick, above — who runs in the 75 to 79 age group — began at Glasgow parkrun (now named Pollok parkrun) in 2009, completing 70 runs there before Greenock was established in 2014.

He has run 170 at Greenock as well as 10 at various other West of Scotland events. Dick competed at very high level in his younger years and indeed still holds the Scottish record for the 600 yards race. 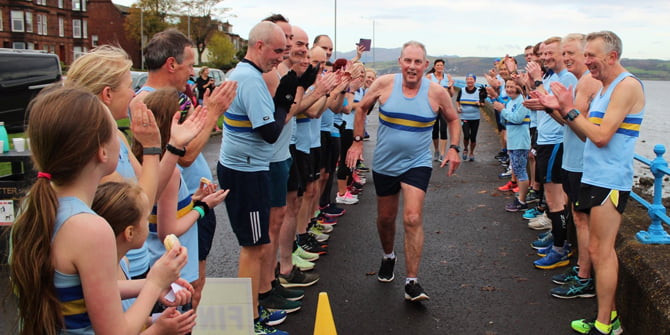 At the finish line on Saturday there was a guard of honour from his Greenock Glenpark Harriers clubmates.

Graham went to Glasgow parkrun in 2010 after initially thinking it was madness travelling to Glasgow early on a Saturday to run five kilometres. It quickly became a habit and he went on to complete 47 runs at Pollok.

Graham was keen to establish a parkrun event in Greenock and has been a run director since it started. He has volunteered 160 times and has completed 178 runs.

Meanwhile, Stuart Chalmers and George Hegarty both completed their 100th parkruns and Viki Smith and Graeme Watson celebrated their half centuries. Viki volunteered at the first Greenock parkrun, and has completed most of her runs at Linwood.

The dry and calm conditions were ideal for PBs with 21 runners improving their times.

Runners were treated at the finish line to cake, tablet, scones and hot drinks — organisers thank all the bakers and providers of goods.