GREENOCK return to playing in the top flight of cricket in Scotland on Saturday afternoon when they welcome Tunnocks Uddingston to Glenpark for the opening fixture in the WDCU Premier Division.

The Lanarkshire side are potentially one of the strongest sides in the league and will provide a challenging first match for Greenock.

Greenock’s three pre-season friendlies provided some match practice for most of the players who will take to the field on Saturday, but competitive cricket is different to friendlies, and players will need to be at their best for to ensure a top team performance.

Neil Flack, Scotland’s former Under-19 captain, is available to make his first appearance of the season for Greenock. His six months playing in Tasmania throughout the Scottish winter will have given him valuable experience which hopefully will translate positively for the local side.

Flack will almost certainly feature early in the Greenock innings and he is likely to be joined in the top part of the batting order by Harry Briggs, Phil McIntosh and Aussie overseas amateur, Kyle Scrimegour. These four players are all capable of scoring well, and should they do so, then Greenock should post a good total if batting first, or, if chasing the visitors’ total, be well in the game.

Scrimegour showed in his outings last weekend that he is a talented batsman. He is a left-hander and has an appetite for scoring runs. He demonstrated some of his shot-making skills, particularly in the Sunday fixture against Renfrew, and, if he can get settled into his innings, then runs should flow.

Phil McIntosh is a player who can very quickly put runs on the board and, if in form, has the ability to cause opposition bowlers serious problems. Harry Briggs, in contrast, is a young player who builds his innings carefully and Greenock will be keen for him to bed himself in and stay at the crease for a lengthy period. 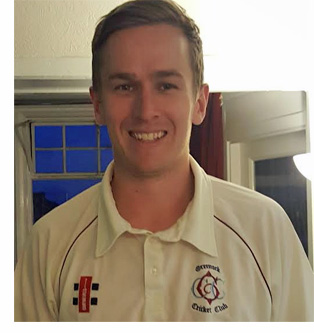 Pacing the innings and patiently building a good score has been a problem at times for Greenock but this season the side has, on paper, a strong batting line-up. Scrimegour and fellow Australian, Julian Hulbert, pictured, will add considerable strength to the side in the batting department, but others also have sufficient experience to recognise what is required. Shailesh Prabhu, Chris Hempsey and Under-17 Scottish international Louis Ware, must ensure that the middle-order delivers when they are called into action.

Hulbert and Scrimegour will form a key part of the Greenock bowling attack. Both are left-arm bowlers who can generate pace but each will require to get used to Scottish wickets. Louis Ware, who gained a regular place in the 1stXI last season, will also feature as an important part of the Greenock bowling line-up along with Greg McDougall and Sam Sanghera. Neil Flack’s off-spin will provide an important option for Greenock and proved successful last season.

Uddingston will feel that they have a strong and capable side with their professional Anwar Hafeez at the top of their batting order. Players such as Sam Allan, Amir Gul and Gavin Bradley have plenty of experience and will give Hafeez plenty of support.

And then there is Ross Lyons. The former Scottish international transferred to Uddingston from East Kilbride during the off-season. Lyons, who grew up in his very early years in Greenock, had an outstanding season for EK and collected the WDCU award for the top all-rounder in the Premier Division. His ’capture’ by Uddingston is a significant boost for the Lanarkshire side and Greenock will do well to contain his performances with both bat and ball.

Visitors’ captain, Bryan Clarke, is an experienced campaigner and he will utilise his players skilfully during the game. In his bowling line-up, he has Aussie overseas amateur Riley McGuire from the Frenchville Cricket Club in Queensland, who will likely lead the attack alongside Allan Laycock. Others who Clarke can call upon include Adil Raza and Amir Gul….and, of course, Lyons.

Greenock seem certain to be without their captain, Jonathan Hempsey, who tested himself out last weekend, but, at the time of writing, his foot injury seems to have ruled him out of the side. This is undoubtedly a blow for the Glenpark team, but vice-captain Neil Flack has sufficient experience to take over and ensure the side is motivated to perform to a high standard.

Local supporters are looking forward to the match on Saturday and the Greenock performance will be keenly watched to assess how well the players are able to adapt to moving up to the top flight.

The opener against Uddingston could hardly be a sterner test, but it will be one which the local side will relish.