BATTERY Park, Greenock, is to be turned into a massive dog toilet for the West of Scotland.

Inverclyde Council believe the radical plan will help rid the rest of the area of the problem of dog-fouling. 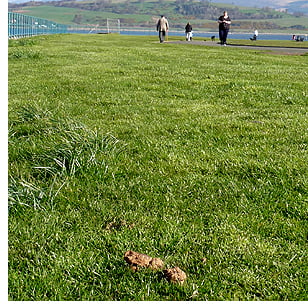 And a study by consultants has shown that the new dog loo will actually increase tourism.

The facility – dubbed Inverclyde Canine Relief Area Provision — will take up about half of the park.

It will be fenced off and staffed by trained waste handlers who will do the poop scooping for dog-walkers.

A non-profit-making trust will be set up by the council to run the scheme.

Spokesman Susan Wage explained: “All the evidence has indicated that this kind of waste service is best done in an arms-length manner, rather than directly by the council.

“We have a motivated team in place who can’t wait to deliver benefits to Inverclyde. We believe dog-walkers will come to the park to take advantage of the convenience.

“It makes sense to have all the dog poos in one place. There will be increased anti-fouling patrols and higher fines in other areas and we will be burying anti-dog devices in other parks so that dogs won’t go in them.”

She added: “We also reckon dog-walkers from outwith Inverclyde will make the journey down to what is a beautiful park where they will be able to enjoy an outing knowing they won’t have to scrape their pet’s excrement off the grass.”

It is hoped the initiative can be self-funding through recycling the dog waste as a fertilising aid in agriculture. Ms Wage said: “Unlike other areas in the economy, we are not expecting the bottom to fall out of this particular trade.”

Ms Wage admitted: “We are expecting nearby residents, especially those down wind, to kick up a bit of a stink but pioneering projects like this often attract an unreasonable level of Not-In-My-Back-Yard protest. We are confident we can win people over by the time things come on stream for 1 April next year.”