PLAYERS Battle It Out In Greenock Golf Club Championship

In the knockout rounds in the week preceding the final, Crawford saw off the challenges of Kenan Ingram, Stuart Gallagher and, in the semi-final, Chris McAulay.

Paul was victorious over Paul McAulay, Stevie Mullan and, in his semi-final, previous winner Alistair Roy. This set up an intriguing final with the two protagonists separated by some 35 years of age.

The weather did its best to spoil the day, with incessant overnight rain, but the course drainage dealt well with the deluge and the 36-hole match proceeded as planned. Paul established a four-hole lead after nine holes with the aid of birdies at holes two and seven and some uncharacteristic errors from Crawford on holes four and five.

Paul extended his lead to six early on the back nine courtesy of his outstanding short game and, in particular, his red hot putter which had served him well all week. Eventually Crawford started to show why he has been a multiple winner of this event over the years by making birdie on 16 and four on 17 to get the final back to four at the halfway stage.

A quick turnaround was agreed by the players at lunchtime to try and avoid the next bout of forecast heavy rain and, in the afternoon, the gallery following the match were treated to some outstanding golf by both players which showed just why they are two of the best golfers at the club.

Paul birdied the first hole to immediately go back to five up before Crawford bounced back with a birdie at the second. Incredibly both players then had birdie twos at the third hole. Paul won the fourth with a par and the fifth via a drive and stunning five-iron into 20 foot on the par five to go back to six up again. 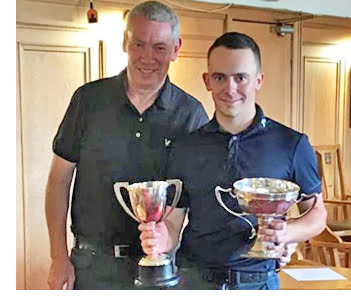 The birdie blitz continued as Crawford made a three on the sixth to get it back to five but, despite having chances on a few holes to narrow the gap further, the putts dried up for Crawford, and Paul was content to play conservatively to see the match out.

This resulted in a run of holes being halved for the first time in the final and eventually saw Paul close out the match on the 31st hole. Incredibly at this stage he was four under par for his afternoon round with Crawford also under par in the afternoon.

The final was played in a great spirit throughout matched with some great golf for which both players take a lot of credit. Paul, pictured with club captain Mick O’Brien, is a worthy winner of his second championship whilst Crawford showed that he can clearly still add to his series of wins.