TO coincide with the first golf major of the season, The Masters, Port Glasgow Golf Club hosted its inaugural Ryder Cup-styled Masters Cup on Sunday.

Forty members took part in the competition which matched up a team of the club’s more senior members (The Codgers) against a team of the younger members, (The Young Team) over two sessions of match play golf.

The 18-hole course was creatively adapted for the day into two separate nine-hole courses, so that each player had a four-ball match over one of the nine-holes in the morning session followed by a singles match over the opposite nine holes in the afternoon session.

The first of the matches returned with both teams earning 2½ points each. However, with some impressive wins in four of the remaining five matches, The Young Team took the morning session to lead heading into the afternoon with a score of 6½ to 3½.

Spirits were high within the clubhouse and the anticipation was mounting as the afternoon singles session neared with a few players from team Codgers looking to make up for their loss in the previous session.

In the afternoon, both teams recording wins in the early matches. In the highly-anticipated captains’ grudge match, McLeod came out on top for the Young Team easily dispatching his counterpart Rodger 2&1 to claim the first point of the session.

However this would not set the tone, and in total contrast to the morning session, it was the turn of The Codgers to dominate. With point after point being loaded on to the scoreboard, The Codgers raced towards the 15½ points that would secure the win. With only a handful of matches left on the course ,it didn’t look good for The Young Team as The Codgers had now stretched into a commanding lead.

A small glimmer of hope was given with some late wins in favour of the Young Team, however these were merely a consolation as Tommy Bryceland secured the winning point for The Codgers with a final score of 17-13 to the senior members. Junior member Dylan Leonard proudly assisted McLeod in presenting winning captain Nicky Rodger and his team with the Masters Cup trophy. 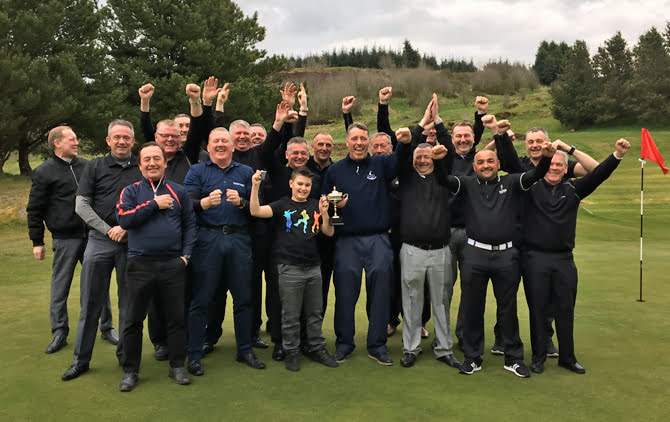 In his acceptance speech, club captain Rodger praised the efforts of head greenkeeper Jim McCurdy and his staff for presenting the course in such pristine condition so early in the season after a difficult winter. He also thanked the bar staff and new resident caterers (First Choice Catering) and everyone involved in the organisation of what was a brilliant new event for the club and a great day of golf.

He added: “This was the first time we have held an event of this type at the club but I can safely say this will not be the last. This will now be an annual event on our calendar and going forward I would like to see more members taking part. The club is moving in a good direction, the buzz around the place is amazing and, with similar events like this planned, we hope to attract more members, both playing and social.”

Playing and house memberships are available — ccontact the club on 01475 704181 or visit our website www.portglasgowgolfclub.com for more details.