Some visitors came from as far afield as Falkirk to sample the spectacular views and challenging golf test the Port Glasgow course has to offer. The players couldn’t have asked for better weather — with clear blue skies and very little wind, the playing conditions were almost perfect.

The course itself was presented, as always, in magnificent condition by head greenkeeper Jim McCurdy and his staff.

Scoring was unusually high in the early stages, despite the seemingly calm and sunny conditions. The consensus from the players as they were coming in was that the freshly mown, slick greens were causing most a bit more of a challenge than they were initially expecting.

In one of the early three-balls, Port Glasgow member Scott Hillhouse set the benchmark with a level par (nett) round of 68. This proved to be the target to beat as Scott led Pete Daly of Whinhill GC by two full shots for the majority of the day. 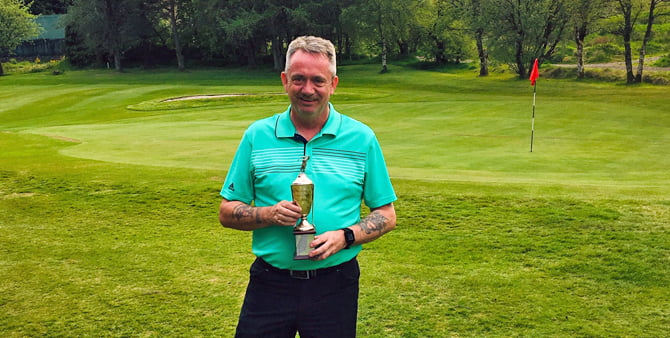 However, in the second-to-last match to return, eventual champion James Reilly, pictured, posted the only sub-par round of the day. With a nett score of 67, James topped the leader board with only one game left on the course.

In the final three-ball, Sam McAlinden also carded a score of 68, but a better inward half was enough for him to claim second place ahead of Hillhouse.

Port Glasgow Golf Club thank everyone who took part in the event for their support on what was a great day of golf.

The club looks forward to seeing players back for the coveted Baxter Open event (In Memory of Robert McNeill) on Sunday 21 July. To book a tee time for this event follow the link on the club’s website www.portglasgowgolfclub.com or for more details email the match secretary at matchsecretary_pggc@outlook.com.