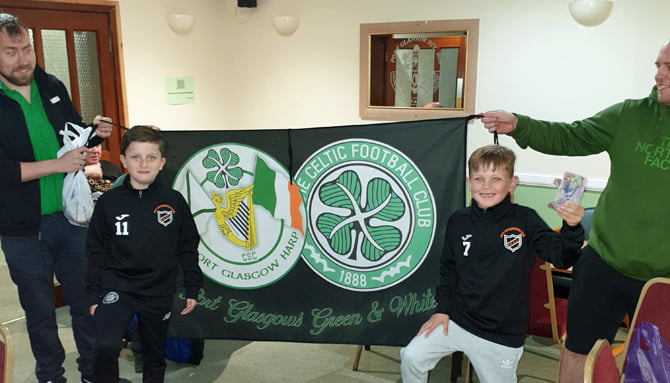 The 2010s (Orange) thank Port Glasgow Harp CSC for sponsorship which has enabled the team to get new training balls.

The squad is also grateful to Donnachie’s Diner for their continued support.

This was the last Divisional Cup game of a disappointing campaign. The Port conceded within the first two minutes as a shot from inside a crowded box found its way through the keeper’s legs via a deflection.

Fifteen minutes later, the Port lost centre-half David Watt from a recurrence of the ankle injury that has plagued him most of the season. He tussled with the Finnart forward in the box and the ref blew for a penalty which made it two-nil to Finnart. The Port needed to shuffle the pack with Fuller coming on and Gilmour dropping back into centre-half to cover for Watt.

A counter-attacking move saw Jai burst forward and he showed great awareness to square the ball for Paddy Gault to score from edge of the box, so it was 2-1 half time. The next goal was the important one and unfortunately it went the way of Finnart. There were more injury woes for the Port — Declan Byrne and Callum Brown those affected.

Finnart had a few chances to put the game to bed but the Port had Kyle Arkless to thank for keeping them in the match on a few occasions. A glimmer of hope came from Matthew Anderson as he picked up a ball in the Finnart box, twisted and turned brilliantly before shooting into the net and making it 3-2.

This should have been the catalyst for the boys to push on and get something from the game but unfortunately the Port were reduced to 10 men as Luke picked up a second yellow. Finnart made the most of the numerical advantage and killed the game off by adding a late fourth goal.

Men of the match were Jamie Gilmour for his display in central defence and Matthew Anderson whose attitude has been brilliant and for his goal for which he showed an individual bit of skill.