EX-Addict David Hopes To Make A Difference As Youth Worker

YEARS of heroin addiction brought David Harper to rock bottom but now he is set to use his nightmarish experience — and the faith which helped him escape — in his new role as a Christian youth worker.

David (34) was homeless and weighed just seven-and-a-half stone when he finally sought a way out of drug abuse. His life has been transformed thanks to Christian drug outreach and rehab projects run by Teen challenge and The Haven at Kilmacolm. 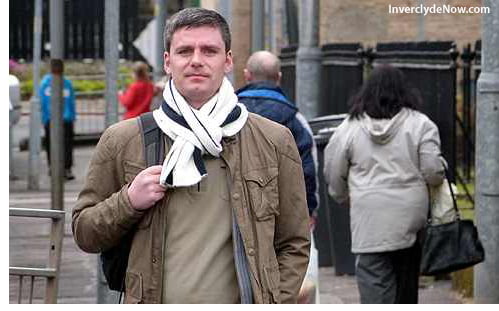 Now David has started work with Inverclyde Youth for Christ. He said: “It’s an amazing opportunity. It’s everything I wanted. I know this area, I grew up here, I ran about these streets, I know what these kids face on a daily basis.

“I want to use the nightmare I have come through to try and stop others doing the same. I am hoping and praying that young people will see this guy’s not just winging it. I know with every fibre of my being that heroin is for mugs and I learned the hard way.”

David, who grew up in Leven Road and Burnhead Street, Greenock, started drinking alcohol and smoking cannabis when he was in second year at high school, and describes the experience as a “slippery slope” to the next drugs.

He was addicted to heroin by the time he was sitting his exams. He left home at 16 and drifted, staying in acquaintances’ houses. He recalled: “We didn’t know who we were. We were wee boys trying to act like big men. We thought we knew better. When you realise you are caught, it’s too late. In a very short period heroin ruined my life.”

David started stealing and shoplifting, and served short jail sentences. He said: “The group of friends I had were never out of jail and so many of them died.”

David was living in the Inverclyde Centre for the homeless when he started going to the Teen Challenge outreach bus which parks across the road from the centre on Monday nights He said: “I knew I had to change or I was going to die. The volunteers on the bus spoke hope into me, showed me it didn’t have to be this way. There were people who were saying they had been like me and changed. The bus was a bit of light in an otherwise dark town.”

He added: “I saw qualities in them that I know now were the fruit of God’s Spirit. They weren’t just good people. They believed God called them to do what they were doing. They were qualities I had never seen before; people using their lives to help others.”

David went to the Haven in 2009, for an 18 -month residential Christian rehabilitation programme. “I was completely broken,” he recalled. “Outside of heroin addiction I didn’t know who I was. I was controlled by addiction. I used to sit and think ‘What happened to me? How did this come about.’”

David then went to the school of ministry run by Teen Challenge in Wales where he learned how to work in Christian outreach and rehab. Now he is looking forward to his new job working with Inverclyde’s young people. “I want to make a difference,” he said. “The hope is that as I settle into the role, I might take the lead on some new projects for Inverclyde Youth for Christ including social action – working with young people so they can help others.”