TOWNS and villages across Inverclyde will mark Remembrance Sunday on 10 November.

Inverclyde’s Tommy sculptures will be mobilised to stand watch at or close by each of Inverclyde’s war memorials. Commissioned last year to mark the 100th anniversary of the end of the First World War, the Tommies depict the outline of soldiers. Tommy Atkins is a generic name for British soldiers commonly used by all sides during the First World War.

Inverclyde Provost, Councillor Martin Brennan, said: “All of the veterans who fought in the First World War have now passed away and the majority of those from the Second World War are now in their 90s. There will come a time in the not-too-distant future when none are left alive.

“Despite losing this living link, we will still remember the sacrifice they and their comrades made on our behalf, many of them in their teens and twenties. We will also remember those service men and women who have given their lives in the line of duty during the many conflicts since the First and Second World Wars.

“The Tommies are a poignant reminder of the impact on local communities of losing so many young people, every one someone’s son, daughter, brother, sister, father or mother.”

Following the service in Greenock, Lyle Hill will be the focus as Inverclyde welcomes the French Consul Laurence Pais to commemorate the personnel of the Free French Navy who were stationed in Greenock during the Second World War. 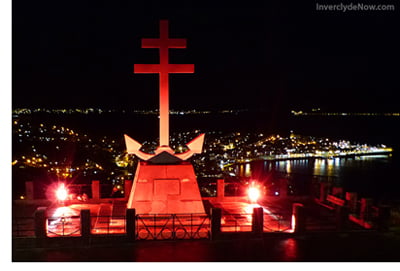 She will be joined by Deputy Lord Lieutenant Hugh Currie and a representative of the Canadian Government.

From tonight (Tuesday 29 October) the Free French memorial on Lyle Hill will also be illuminated in red to support Poppy Scotland.

Kilmacolm — Service at Old Kirk at 10.45am then ceremony at war memorial, Lochwinnoch Road, around noon.

Port Glasgow — Service at Port Glasgow Parish Church (formerly St Andrew’s) at 10.45am followed by ceremony at war memorial around 12.30.

Greenock — Service at Wellpark Mid Kirk at 10.45am followed by ceremony at war memorial in Wellpark around 12.30. and at Lyle Hill around 1.30pm.

Gourock — Service at Old Gourock and Ashton Church at 10.45am followed by ceremony at war memorial, Albert Road, around noon.

Inverkip — Service at Inverkip Church at 10.45 and followed by ceremony at war memorial, the Point, around noon.

Wemyss Bay — Service at Skelmorlie and Wemyss Bay Parish Church at 10.45 followed by ceremony at war memorial, Pierhead, around noon.