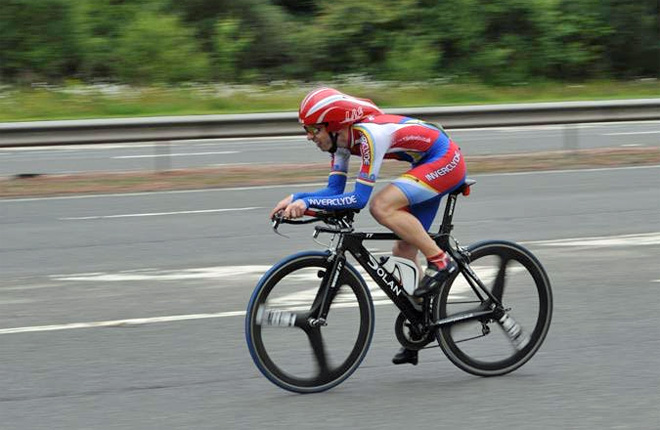 INVERCLYDE Velo have had a busy week with a good number of members out training and racing.

The fifth race in the weekly Alex Hunter Time Trial League was held on Tuesday. It was another cold and blustery night with a north wind for a change. This didn’t discourage the 11 riders who took part and posted some good times. Paul Symington set an excellent time of 34 minutes 9 seconds at his first attempt.

The race was won by Scott Newman, in great form after a strong ride at the Tour of the Meldons time trial two days previously where he took 26th place with a time of 01:00:34.

It was a brighter but still windy night on Thursday for the APR (Australian Pursuit Race). A strong first group of Derek Robinson, Mark Smith, Tam May, Niall Blackburn and Paul Symington was followed at three minutes by George McCarter, Robert McCready and Alan Holms. Scott Newman, Matt Hennon, Stuart Carmichael and Paul McGonigle made up the scratch group, a further two minutes back.

The first group worked well together and kept a steady gap back to the second group throughout the first lap. Things began to look a bit more serious when the second and scratch group joined forces on the second ascent of the Holmston and started the chase in earnest. However, the first group were just too strong for the chasers and held a good gap right to the end where a final surge took Niall Blackburn clear of Tam May for the win. The remaining riders were led over the line by Stuart Carmichael. Paul McGonigle retired at the end of the first lap.

Scott Newman, Peter Harridge and Patricia Baird were in action on the West Ferry course at the CTT 10-mile district championship time trial on Sunday. The very strong and cold easterly wind made the return leg of this exposed course a particularly brutal challenge. Hopefully the weather will be a lot kinder to the riders on Wednesday 12 July, when Inverclyde Velo hosts an open 10-mile time trial on this popular course.

Inverclyde Velo welcomes all riders to the weekly rides at 6.45pm throughout the summer. On Tuesdays it’s the time trial on Cloch Road just past McInroy’s Point and Thursdays along at the Gantock flats for the APR. Anyone using Strava can check out the route for both events using the “Cloch Time Trial” segment.