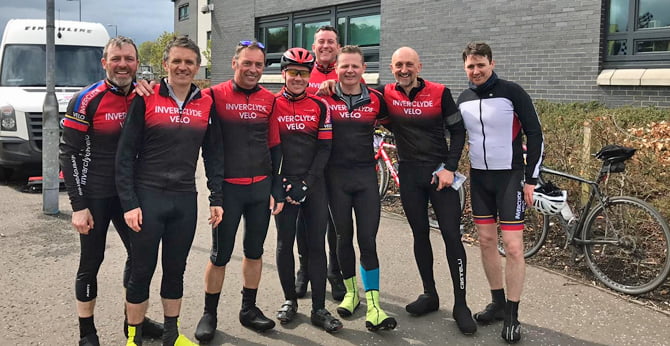 AN intrepid group from Inverclyde Velotook on an early season conditioner in the form of the gruelling Kinross Sportive.

At 88.4 miles and 5,774 feet of climbing, the black route presented a considerable challenge for the group, made up of Paul McCrorey, Fergus McClafferty, Graham Quigley, Gavin Morrison, Jim Logue, David Campbell, Grant Foley and Lewis Beck.

The route leaves Kinross heading east, skirts Loch Leven and takes in the Lomond Hills as it loops through beautiful scenery across Perth and Kinross. The highlight of the ride was the the mighty Dragon Hill topping out at 870 feet with gradients exceeding 15 per cent.

After the rest stop at Dunning, where the group enjoyed a spread of assorted local cakes, they were faced with a final ascent, up Dunning Common, adding a further 902 feet of climbing.

Jim Logue led the top of the timed climb where they regrouped and took in the welcome long descent. Thankfully the wind didn’t blow too hard over the day but the group experienced rain and a hail storm before the sun broke the sky as they made the final push back to Kinross through the Crook of Devon.

The group finished together in a time of five hours and 50 minutes.