CRICKET — Greenock Need To Be At Their Best Against League Leaders

GREENOCK 1stXI take to the road yet again this weekend, travelling through to Uddingston, having last played a match at their own Glenpark ground on Wednesday 7 June.

Including this Saturday afternoon’s game, Greenock will have played 11 matches out of 12 away from home since the beginning of June, possibly a record.

Saturday’s opponents, Uddingston, are the current Premier Division league leaders having won five out of the six matches they have completed. Most recently, last Saturday, Ferguslie, who had been leading the Premier Division, were toppled by Uddingston following their match at Bothwell Policies, which the Lanarkshire side won quite decisively.

Key for Uddingston this season has been Ross Lyons. Brought up in his early years in Greenock, the then young Ross played occasionally for Hillend at the Fort Matilda ground along with his late father Graham. On moving to live in Glasgow, he joined Clydesdale and gained recognition at junior international and then senior international levels.

Following a spell living and playing in Australia, Ross returned to Scotland and joined East Kilbride. However, in the winter break between the 2016 and 2017 season, Ross moved to his present club Uddingston and he has been a major reason for the Lanarkshire club’s elevation to the current top spot in the league.

Last Saturday, Ross almost single-handedly brought about the defeat of the then league leaders Ferguslie. Batting first, Uddingston amassed 242 for the loss of 7 wickets of which Ross scored an unbeaten 102 runs. He then went on to rip through the Ferguslie batting line-up taking five wickets for just 17 runs. It was the ‘Ross Lyons Show’.

Greenock will be hoping that he does not bring a similar performance to this Saturday’s match at Bothwell Policies.

Of course, Uddingston are not simply a one-man team. Others whom Greenock must be aware of include Amir Gul and Anwar Hafeez who have been important wicket-takers and also, on occasion, run-scorers. Gavin Bradley, Bryan Clarke and Harry Singh have also each had some innings of note in the first half of the season.

In the opening Premier Division match of the season at Glenpark at the end of April, Greenock had Uddingston on the ropes early in their innings at 65 for 5 wickets, but failed to drive home the advantage and the Lanarkshire side managed to bat through and finish on 190 for the loss of nine wickets. In reply, Greenock could not find a single decent batting partnership and were bowled out for 122.

Since that opening day, the Glenparkers have shown in the league and cup games played to date, that they can be a match for any of the sides in the Premier Division. Ayr were beaten by a good all-round team performance at Glenpark. Ferguslie were well beaten in a recent match at Meikleriggs and Dumfries only narrowly won in a very high-scoring match at Nunholm.

Neil Flack has for much of the season been in fine form and has scored more than 500 runs. Kyle Scrimegour too has scored runs regularly although is still seeking to be consistent in building on good starts to his innings, while Louis Ware and Julien Hulbert have each shown they can provide important runs in the middle order.

And in the bowling attack, Greenock have players who can provide problems for the best of batsmen. Michael Papps, the New Zealand international who has been scoring runs for fun for Ayr, was removed for a relatively low score at Glenpark and Con De Lange and Richie Berrington, while contributing some important runs for Clydesdale last Saturday, did not get the really big runs each is capable of scoring.

On Saturday, as the holiday season kicks in, Greenock will be missing Shailesh Prabhu, Sam Sanghera and Chris Hempsey and also Phil McIntosh who injured his hamstring last Saturday at Clydesdale and will be out for a number of weeks. 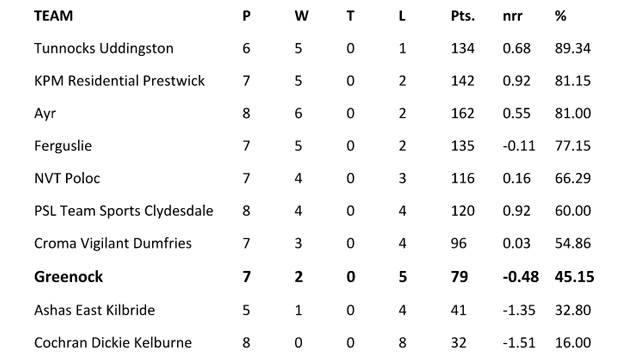 On Sunday, the Glenpark club’s Hillend XI will travel through to Larbert to play Stenhousemuir in the Sunday League.

On Wednesday evening, Greenock won through to the semi-final of the McCulloch West League Cup by the narrowest of margins in their quarter-final tie against Prestwick at the Henry Thow Oval. The game ended in a tie with both sides having scored 130 runs, but Greenock won by virtiue of having lost only three wickets in their innings, while Prestwick lost seven wickets.

Kyle Scrimegour scored 55 not out and Chris Hempsey scored 28 in the Greenock innings while Neil Flack with 4 wickets for 19 runs and Sehmat Pandher 2 for 17 were the top two wicket-takers for Greenock.

Greenock now meet Poloc at Shawholm on Wednesday 26 July in the semi-final.

Greenock’s final sectional group match in the Western Cup against Clydesdale was rained off on Tuesday night. It was a match Greenock needed to win to overtake Clydesdale, but, with no play possible, each side gained a point which meant the local side finished just one point behind the Titwood team, who topped the section and now qualify for the semi-final knockout stage of the competition.