CARDWELL Expert’s ‘Hot Tips’ For Gardening In The Heatwave

GARDENERS are being given some “hot” tips on how to take care of their plants and flowers in the current heatwave.

Experts at Cardwell Garden Centre, near Gourock have come up with hints to make sure people avoid their dahlias drying up, their marigolds melting, sunflowers getting scorched or their periwinkles wilting. 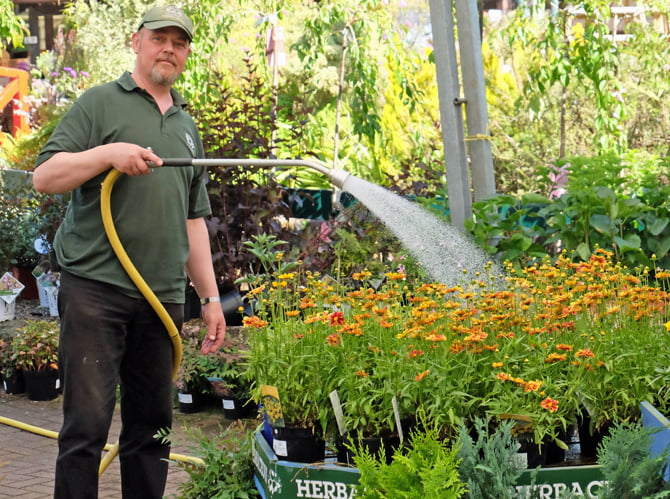 Horticulturist Brian Hawthorn said: “The best time to water your garden is in the cool of the evening using a watering can, or hose with a spray attachment. If you water your plants in the heat of the day any droplets of water on the leaves can magnify sunlight and cause scorching.

“It’s also best to water the ground around the same area of the plant’s canopy, instead of just spraying the leaves, as this makes sure the roots get the benefit of the irrigation.”

Brian also suggested adding a layer of bark, or mulch around borders, as this will retain moisture in the soil. He added that if the soil in a pot, or basket of flowers has dried out and formed a hard layer on top, then water may simply run off the surface and down the side without getting to the roots. To avoid this, break up the surface of the ‘caked’ soil so the water gets to where it should be.

He continued: “It’s also a good idea to water your grass. And if you are mowing the lawn in this weather, it’s worth adjusting the blades to a higher level, as longer grass itself gives the soil and the roots below some shade from the burning sun.”

Brian added: “In the hot weather it’s even more important to give a daily watering to fruits and vegetables like tomatoes, potatoes, cucumbers and courgettes that need water to swell up before being picked. “

He also asks people to consider wildlife during the heatwave: “With not a puddle to be seen just now, you’ll be doing the birds in your garden a big favour if you keep your birdbath topped up with fresh clean water, so they can have a drink and clean their feathers,” he said.

Brian had one final piece of advice for gardeners: “After you’ve looked after your plants and flowers, it’s time to look after yourself. Pour yourself a long, cool drink and sit back in your lounger and enjoy your garden bathed in the sunshine while it lasts!”