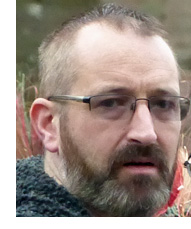 Mr Easdale brought the action after multiple defamatory and false claims were made by Mr Houston, pictured, against Mr Easdale and his business interests.

Mr Houston, who announced earlier this year he was standing as an independent in the Inverclyde Council elections, was also told he was liable for legal costs arising from the case.

In a series of videos and blogs published on multiple websites during late-2016, Mr Houston alleged that businesses owned by Mr Easdale were involved in criminal business practices.

Despite repeated requests by legal representatives asking Mr Houston to remove the offending posts – and the intervention of moderation staff on sites such as Facebook and YouTube – Mr Houston continued to post and repost the offending material.

Following a summons issued in November, Mr Houston has now had damages and costs awarded against him. The court also told Houston to refrain from any further posts of a defamatory nature.

Mr Easdale said that the court action gives a clear indication that he is no longer willing to have his reputation –- or that of his businesses -– tarnished by lies published online.

He said: “Whilst it is regrettable that such an action had to be taken, I was left with no other option despite repeated requests to Mr Houston to stop making defamatory claims against me and my companies.

“For too long we have had to put up with nonsense written as fact on blogs and social media platforms — and this was one step too far. I am clear, as are others within our various businesses, that we will not hesitate to publicly defend our reputations where it is necessary to do so.”

Mr Houston wrote on social media this afternoon: “Thank you for the messages of support. At this moment in time I am unable to offer any comment regarding the news being reported this afternoon. It is a sensitive matter which I shall comment publicly upon when the time is right.”