Teams from Dunoon, Rothesay and Houston, as well as local clubs, took part. The day started in the cold with some light drizzle, however the competitors still took to the greens filled with optimism.

Following completion of the group stages, three teams from Victoria, two teams from JG Fleming and teams representing Rothesay, Wellington Park and the host club all managed to qualify for the knockout rounds.

Three of the ties in the quarter-finals were closely fought games, with two ties settled by a solitary shot The semi-final between P Johnstone and J Sheriff saw the Wellington Park team score one shot in the last end to win 4-3. In the other semi-final, the team skipped by K Speirs won through to the final with a 6-0 victory.

The team from JG Fleming (John Gilchrist, Tommy Wyper and skip Kenny Speirs) were up against Wellington Park (Martin Woodrow, Edward Adamson and skip Peter Johnstone) in the final — a re-run of an earlier group match.

Neither side dropped the standards that they had set during the day as they both played to an excellent level during the final. The final was won by JG Fleming, who had got there without losing a shot in the knockout stages.

The Houston side raced into a four-shot lead after only two ends; the Wellington Park side then won the next two ends to go into the last end one shot down; the final end saw several good bowls from both sides with the JG Fleming team winning the last end to win by two shots. 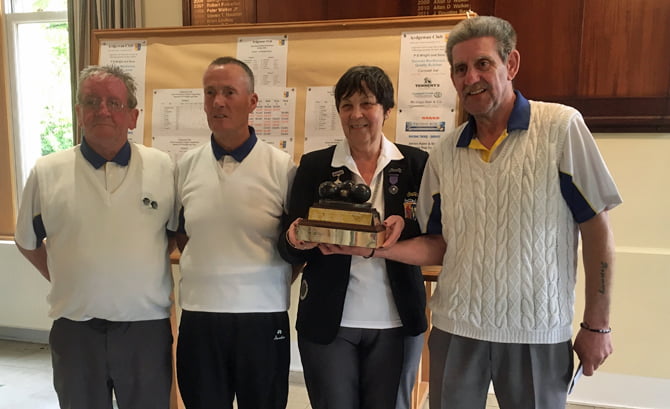 At the close of play, Ardgowan president Shelagh Hendry thanked sponsor PB Wright and Sons for their continued generous sponsorship, and presented the trophy to the winning JG Fleming team.