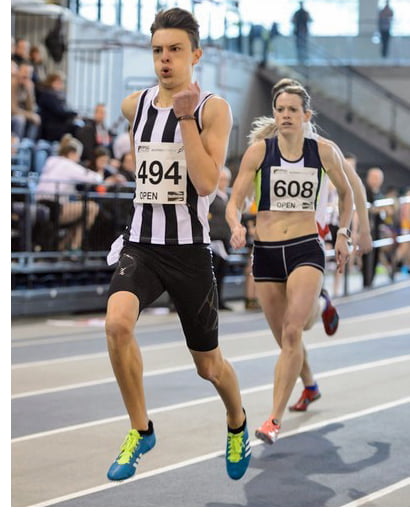 Under-17 sprinter Scott Hannaway had the privilege and pressure of racing Eilidh over 400 metres, pictured. Scott was in contention as the athletes broke from their lanes to receive the bell with one lap to go. Sitting on the shoulder of Eilidh, Scott made his move on the back straight to pull clear of the Olympian and stride over the finish line in second place with a very fast time. This performance gave Scott the confidence to attack his 200-metre race. After a fine back straight, an increase in speed on the home straight carried Scott to victory in a new life-time best of 23.10 seconds.

Mark McLachlan recorded a life-time best in his 400-metre race, knocking a second off his previous time. Sticking intelligently to his race plan, Mark moved ahead of his competitors with 100 metres to go, running clear to win in a new best of 51.34 seconds. Scott McLuckie added to the club’s 51-second runners in his 400-metre race. Similar to Mark, Scott powered through the field in the final 50 metres to claim second spot with the clock stopping at 51.76, another sub-52 run to add to Scott’s CV. Ciaran Hogg added to the 400-metre successes claiming a new best by a full second. Ciaran was always fighting for the lead and a very determined final 150 metres saw him stride for stride with a fellow athlete to claim a silver spot and a life-time best.

In the shortest sprint of the day, 60 metres, Drew McIntyre continued his rehabilitation to top speed recording the club’s fastest sprint of the day in 7.18 seconds. Edward Docherty and Niamh McIntosh emulated Drew, recording new bests of 8.34 and 8.79 seconds respectively. Later, Edward made the transition to the longer sprint of 300 metres setting a fine marker to chase during the summer months of 43.94 seconds. In the 200 metres. the strength-in-depth was evident with Scott McCluckie and Drew Mcintyre recording times just outside that of Scott Hannaway in previous rounds.

In the female race, Evie Semple took club honours with a fast time just ahead of Georgia Morrison who created another of the club’s best, going sub-27 for the first time. In the younger age groups Harris Morrison was delighted with his own 200 metres, finishing strongly to record another best in 28.1 seconds.

With the endurance athletes dropping down to the 800 metres, Dylan Crawford secured club bragging rights by the breadth of a vest from Ben Nichol as both athletes were seperated by a fraction of a second. Lewis Hainey displayed his normally-hidden talents knocking three seconds off his 800 metres time to record victory in his race having led from start to finish in a manner which impressed the watching crowd. In the same race Georgia Morrison was battling with the female athletes and a gutsy run was rewarded with a new indoor best. Not to be out done, under-13 Harris Morrison decided to use Lewis’s tactic in his 800 metres sprinting clear on the home straight to record another victory for the local club.